You are here: Home / Author Interviews / Behind the story of Repairman Jack with F. Paul Wilson
Spread the love 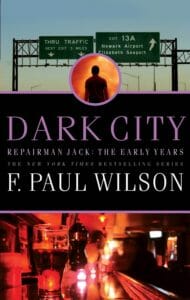 F. Paul Wilson was one of five New York Times bestselling authors who visited U.S. troops in Operation Thriller IV earlier this year. During the tour, he was greeted by many fans of his Repairman Jack series. In this interview, he discusses “Dark City,” the latest book in that series, and where his writing will go in the future.

“I envisioned the main Repairman Jack novels as closed-end series,” said Wilson. “I knew it was going to end with ‘Nightworld’—which is basically about the end of civilization. I didn’t know how many books it would be. But, I knew all the plots. Then, my publisher asked me, ‘Can you backfill any?’ I said yes because I could go back to when he first came to the City. I wanted to show how he came to New York City and learned the ropes.”

“Dark City” is the second book in the Early Years trilogy. During the interview, Wilson noted that one problem in writing the trilogy he didn’t anticipate was a lack of history. He said, “The biggest challenge I faced with the Repairman Jack Early Years trilogy was getting a grip on New York City like it was in those years. I was in and out of the City many times and knew how the City had blended together. What I couldn’t find was anything about New York City in the 90s. There are so many books on New York City in the 1800’s. Then, I found a YouTube video from 1991. Someone shot a video while on a tour bus. There was the Army recruiting station, the bus terminal. It was all prior to Disney. Times Square was a very sleazy area prior to 93. I wanted to set the trilogy in that period and fix the period in people’s minds and have Jack work through it all. I had to research the politics and crime.”

Repairman Jack fans know the series is about the individual against the collective. “Jack has no Social Security number, no official id, and lives below the radar,” said Wilson. “The subtext and irony of the series is that here’s a man who has spent his life searching for personal autonomy and learns that his life has been controlled since he was a kid. Since 9-11 everywhere you turn there’s a TV camera recording street traffic or people walking in and out of stores. Jack started before 9-11 and grew up when Social Security numbers were optional. In the mid 80s, we added Social Security numbers at birth. Jack only works for cash. The book, underneath it all, is about how you can live that way.”

Wilson is the author of more than thirty books in the science fiction, horror, and contemporary thriller genres. Because the Early Years trilogy is a prequel series, he wanted to be sure that he wove the story into the original Repairman Jack series. He said, “I love novels where there are people in different threads and they start crisscrossing and eventually one thread solves another. In the Early Years trilogy, there are all these things that don’t seem to be connected and by end of Book 3, it all will come together.”

Fans are surely asking themselves whether this will be the end of Repairman Jack. Wilson’s response was noncommittal. “Dark City is the next to last book in the series. I’m not saying I will never write another Repairman Jack novel, but the schedule of a new novel every Fall will end.”