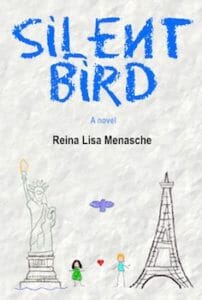 Reina Menasche’s “Silent Bird” was a 2013 San Diego Book Awards Finalist, so for this interview the author, radio host, and social worker talked about the issues that compelled her to write the book.

Menasche said, “As a social worker I’ve witnessed quite a few issues that have resonated with me or touched my heart. ‘Silent Bird’ arose out of my work with Children’s Protective Services. Specifically, I recall feeling shocked at how prevalent sexual abuse was in the histories of my teen clients—and how devastating the experience continued to be as these kids (girls mostly) transitioned into adults seeking true intimacy. I thought: what will happen when one of these girls falls in love, and feels cherished? Will the sexual trauma ever heal? What makes someone heal, or decide to heal? How do we know love from lust or habit or manipulation when we’re young and trying to figure out who we are? Well, from all this, ‘Silent Bird’ was born.”

“Silent Bird,” according to Menasche, is a story about healing and adventure and intimacy versus sexuality. She added, “The book is also a story of cultural conflict and identity. In brief, ‘Silent Bird’ is about a young American woman of Sephardic descent who flees her memories of childhood sexual trauma by moving to the South of France, where she knows no one and does not speak the language. Once there, she becomes involved with a Frenchman and learns that to truly love someone, you have to stop running–and start to fly.”

The first book Menasche wrote was at the age of seven. Of that book, she said, “It was a short book, with a cover crafted of orange construction paper featuring a sleeping cat drawn in crayon. The title was: Tiger the Lazy Cat.” Her first book was about a cat that slept the entire time his owners were on vacation. The interesting thing is that Menasche is returning to children’s books in 2014, this time through the eyes of her “Silent Bird” protagonist, Pilar Russell. Pilar, who is also an artist, runs away to the South of France in the novel where she meets a French musician named Jeannot Courbois. The 2014 picture book will be “written and illustrated” by Menasche’s protagonist. Menasche said, “The book is called ‘The House That Sneezed’ and is meant to assist little kids dealing with loss—while also being a fun read.”

Learn more about Reina Menasche on her website at www.reinamenasche.com where she also writes the blog, “Life Goes On—and We Just Try to Keep Up.” She can also be found as the host of East County Magazine’s radio show (Bookshelf) on KNSJ FM radio in San Diego.