You are here: Home / Author Interviews / CJ Lyons and Broken
Spread the love 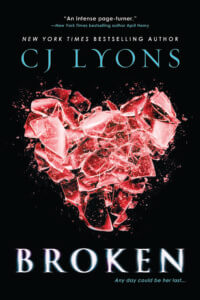 New York Times and USA Today bestselling author of twenty-one novels, former pediatric ER doctor CJ Lyons has lived the life she writes about in her cutting edge Thrillers with Heart. Lyons recently released “Broken,” a novel dedicated to her niece Abby. In this interview, Lyons lends insight into “Broken” and why she writes thrillers.

In “Broken,” a girl who is literally dying of a broken heart dreams of attending high school and being “normal.” Lyons says this concept was inspired by her own family. “I diagnosed my niece, Abby, with the same congenital heart condition, Long QT, when Abby was only twenty minutes old. In fact, Broken is dedicated to her.

“Because of the way her parents raised her, not to mention her own strong-willed personality (the best adjective to describe Abby is fierce), Abby has never let her heart condition hold her back. She lives life to the fullest every day and has grown to be a smart, capable, independent young lady who just happens to carry an AED named Phil with her everywhere she goes.

“But I couldn’t help but think, what if Abby hadn’t been raised that way, what would it be like to live most of your life confined to a hospital bed, always being told that you were “too sick” to have friends or go to school or have any control over your life or your future? How would that kind of life change someone?

“As a writer my job is to create situations where my characters face their greatest fears. But, if you’re facing dying at any moment of any day, it’s pretty tough to come up with a greater fear to face and overcome. And so, Scarlet was created. A naïve and sheltered young lady who knows everything about dying but nothing about living.”

Lyons likes to describe her novels as “Thrillers with Heart.” This description gives her the opportunity to explore a broad genre and her unstated desire to see justice served. “Writing thrillers gives me an outlet to explore the grey areas between the black and white of good and evil,” said Lyons. “And, unlike in the real world where not all of the victims I treated received the justice they deserved, in my novels, I can make sure the bad guys get their comeuppance and the good guys win—although, every happily-ever-after does come with a price, at least in my books.”

Lyons classifies “Broken” as a good example the price characters must sometimes pay. She said, “Scarlet goes through so much and in the end her entire world is shattered, so her happily-ever-after is rather bittersweet. Yet, it’s hopeful—not only are her friends there to support her, but she’s so much stronger than she was at the story’s start and we just know that strength will carry her through the bad times.”

“Broken” is a thriller, but it’s also a love story. In fact, Lyons said that’s her favorite thing about the book. “It’s subtle and quiet, almost as shy and naïve as Scarlet is herself. I think that gives it an added poignancy, especially at the end of the book when Scarlet’s world crashes around her, yet Tony is still there for her, despite tons of reasons to run away and abandon her to her fate.”

One of the other main characters in “Broken” is a compilation of guys Lyons dated when she was young. She describes Tony as a strong, silent Gary Cooper type. “He’s willing to treat a girl he’s attracted to as an equal, respecting her wishes, being there when she needs him, allowing her to be there for him as well. I love that he doesn’t have to go all controlling alpha male (and Scarlet, as naïve as she is, would be so totally susceptible to that kind of guy) to let her know that he’s there for her.”

“I also loved writing their first kiss—quite possibly the most disastrous first kiss ever in recorded history! But, it felt very real, that awkward moment when you realize you’re committed but have no clue what to do or what it means or where to put your hands or turn your head or how long or what will happen next.”

Lyons believes finding the courage to live your life the way you want even though there are no guarantees about what will come next is at the heart of “Broken.” Lyons learned that there are no guarantees in life at the end of her medical education. She said, “I lost a dear friend during my pediatric internship. Thanks to the work of dedicated police officers and forensic experts, his killer was caught. But, there are some areas of the country where crimes go unsolved and killers go free because of a lack of forensic training.”

In an effort to give something back—both to honor her friend’s memory and her readers’ generosity, Lyons began the Buy a Book, Make a Difference (http://cjlyons.net/buy-a-book-make-a-difference/) program to raise funds for worthy charities. For “Broken,” the fund donated to the American Heart Association. They’ve also made donations to Reading is Fundamental, Doctors without Borders, and St Judes Children’s Hospital.

The fund also creates scholarships in her friend’s name. To date, they have created fifty-four CSI scholarships for police officers from underfunded communities all over the US and Puerto Rico. Lyons said, “The best way people can help is to share this link: http://www.sirchie.com/training/training-programs/farkasscholarship.html with their local law enforcement departments and let them know that if they need the training, there’s someone willing to help.” The link provided goes directly to the Sirchie forensic institute’s page with info on the scholarships, not to Lyons’s website.

Winner of the International Thriller Writers’ coveted Thriller Award, CJ Lyons was called a “master within the genre” by Pittsburgh Magazine and her work has been praised as “breathtakingly fast-paced” and “riveting”  by Publishers Weekly. Learn more about CJ’s Thrillers with Heart at www.CJLyons.net