You are here: Home / Author Interviews / Getting to know Carolyn Hart
Spread the love 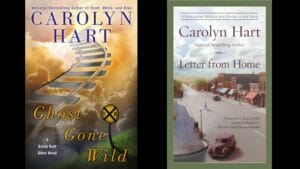 With the release of her most recent mystery, author Carolyn Hart has reached a milestone many authors can only dream about. In this interview, the author of 51 books and recipient of multiple Agatha, Anthony, and Macavity awards discussed the things that shaped her career and perspective on the role of an author.

As a child, Hart knew she wanted to write. She never thought, however, she’d be writing mysteries. “I was quite determined to be a newspaper reporter. When I was a kid growing up during World War II, I thought there could be no more important job than to be a reporter. I saw that the bigger the headline, the more important the story. I thought I would be the next Maggie Higgins. When I grew up, I even had a trench coat and smoked Chesterfields.”

While she’s very friendly and open about her life, Hart is quite modest about what she’s accomplished, even though that career includes nominations for numerous awards, including the Pulitzer Prize for Fiction for her World War II novel, “Letter from Home.” Hart said her career in writing started after she and her new husband moved to DC and started a family. She said, “I missed writing and had read mysteries. I saw an ad in a magazine for a contest, so I wrote ‘Secret of the Cellars.’” That young adult novel led to more novels in the genre. To date, Hart has written 51 novels.

Want to know more about other bestselling authors? Try these interviews:
Operation Thriller authors talk about the USO Tour
Steve Berry talks about a 400-year-old secret
Margaret Coel talks about being a professional writer
See my review of Carolyn Hart’s “Death by Surprise”

“You don’t start out to write 51 books,” she said, “but write them one at a time.” Hart started writing mysteries at a point in time when the only way in was through a traditional publisher. The business, however, has changed and, as Hart said, “These days, publishing is much more focused on the bottom line than the quality of the fiction.”

Maintaining quality is ingrained in Hart’s nature. Does that mean she plots extensively? Quite the contrary. She said, “I have always made it a point of not analyzing too closely. If I think too hard I won’t be able to do it. There are many elements that you need to write a successful scene. I know my characters are always trying to accomplish something. As the author, I may be trying to accomplish things beyond what the character wants to accomplish. I might need to set the scene or develop a plot point, but I’ve never analyzed any of that too closely. Nancy Pickard is highly intellectual about her writing. I’m not that way. I know these things. I know who my protagonist is—that gives me the time, place, and setting. I know who the victim is and the victim is the most important choice because then I know the people who surrounded him in life. I also know who committed the crime and why. I don’t plot ahead.”

In addition to her commitment to producing quality work, Hart also believes that good work will find it’s audience. “I don’t ever think of audience. When I have an idea for a book, I just write the book and hope it will find an audience. After all, there are a great many mystery readers and writers. What is important is whether the reader feels a connection to the book and did it provide an escape or entertainment.”

One of her treasured moments came when the late Tony Hillerman, who was himself from Sacred Heart, a small town in Oklahoma, called about her books and they talked about Oklahoma. At one point, he asked her what little town in Oklahoma did she’d grown up in. “I was so happy because I felt it showed how I’d captured the atmosphere.”

Hart has been writing fiction for nearly 50 years. When asked whether writing had gotten any easier, she said, “Whenever I write any book, I always reach a point when I feel that I’m stuck and I’m a failure and this book will never work. If you just keep on keeping on, it will come together. With the Bailey Ruth book, the last one, several things happened that kept me from being able to spend time with the book. One of those things was that my husband had open heart surgery for a blockage. Fortunately, he made a very good recovery. Despite everything that happened, I was only a week late on my deadline.”

The success Hart has seen might send some writers on a stratospheric ego trip, but Carolyn Hart remains a model of humility. “I never thought the author personally important,” she said. “There’s nothing particularly interesting about me.” I respectfully disagree with Ms. Hart.

Learn more about Carolyn Hart on her website at www.carolynhart.com.