It was only a matter of time before scammers realized yet another opportunity provided by COVID-19—contact tracing scams. I’m a strong believer in contact tracing as a way to help slow the spread of COVID-19, but I also know scammers will use any trick they can to steal your information. Here are a few tips to help you safely maneuver through these very stressful times.

Contract tracing is used to identify people who have come in contact with someone who has tested positive for COVID-19. Contact tracing can be done manually or via an app that runs on a cellphone. Once someone has been identified as having come in contact with an infected person, they are instructed to quarantine and monitor their symptoms daily.

Is it safe to cooperate?

Tips to avoid the scams

Tip #1: Like any other scam, this one happens via email, text message, and/or telephone. An email or text message scam will include a link, which will either download malware or take you to a fake website that will ask for personal information. Do not click that link.

Tip #2: Gone are the days when phone scams were dying out due to their cost. Now, scammers run phone banks, spoof telephone numbers, and train their operators. This makes dealing with a phone version of this scam much more difficult. However, there’s a clear dividing line. If someone asks for your social security number or other sensitive information, even if they say it’s voluntary, assume it’s a scam and hang up.

Tip #3: If you’re feeling stressed or pressured, find someone you can talk to for support. Let’s face it, people under a lot of stress do stupid things. We make bad choices.

Daryl Wood Gerber is not only an Agatha Award-winning author, but also worked as an actress. She even had a role in Murder, She Wrote. Daryl writes the nationally bestselling Cookbook Nook Mysteries as well as the French Bistro Mysteries. Her new series, the Fairy Garden Mysteries, debuts with A Sprinkling of Murder.

It began at the Renaissance Faire

Daryl said the idea for the Fairy Garden Mysteries came to her after she went to a Renaissance Faire and saw a few fairy gardens. “I fell in love with the art. So I set about learning how to make them. I love to garden, but I no longer have the time to do huge gardening projects. Making a small fairy garden seemed the perfect answer to me. I visited a store in Tustin, CA, which was filled with whimsical creations and I felt a need to be creative, myself. As I was making my first one, I thought, wouldn’t this be a sweet theme for a mystery series?”
At first, Daryl wasn’t sure the idea would sell. The genre was a blend of fantasy and mystery and no one had written about a fairy sidekick. “The more I thought about it,” Darly said, “the more the world of fairies filled my mind. How would they talk? How would they act? When Fiona flitted into my mental sphere, I knew I had to write her story. Of course, the protagonist is Courtney, who lost the ability to see fairies when she was young, and now she needs to open her imagination to the possibility that they do exist.”

As an adult, we’re predisposed to stop believing in certain things. Daryl said, “Non-believers can be caustic. Why? Because something doesn’t fit into their mold of what life is supposed to be. In the story, there are fairies and the fairies speak and help with the mystery. Are there real fairies in life? One has to wonder. But the issue of so many in the town not believing and having a bias against Courtney, the protagonist, and her shop itself, poses a problem. People can be mean. Vindictive. One woman wants to close the place down for good. And yet another wants to see a fairy. Therefore, the push and pull of the community comes to bear, you know? What is real? What is fantasy? Who’s to say that one is right or wrong for believing?”

The long road to publication

“I love to entertain,” Daryl said. “It gives me purpose. It’s the main reason why I write. I want my readers to get lost in the world I create, if only for a day or two of reading. I think everyone needs a place to escape, and I like to provide that for my readers. Heck, I need that, too. It’s why I love to read. So if I can provide that moment of peace, relief, and wonder for readers, I’ve done my job on earth.”

The fact is, it took Daryl a long time before she could entertain readers with her work. She wrote for years before being published and said the rejection was heartbreaking. “Over and over, I received responses from agents like, ‘I love this, but I can’t sell it. Can you write another?’ As if writing another was as easy as making a pie. It’s not. But I did. I wrote another book. And another. I couldn’t pin down what I was doing ‘wrong,’ but my work wasn’t resonating. I was about to give up, but I persevered, because in high school I was given the ‘most persevering’ award – not sure why, then, but I sure know why now. LOL Along the way, an agent who did like my work (but couldn’t sell it) asked if I could write something ‘on spec.’ The publisher had come up with the idea for a cheese shop cozy mystery. I said I could, and I did, and they bought it, and I became a published writer. It took ten years to be an instant success. So to all those writers who have not yet been sold, don’t give up. Persevere. If you don’t know why you’re not selling, ask blunt questions of your critique group or agent. Be flexible. Be willing to change. Be willing to write to the market. But persevere.

You tasted how many cheeses?

“When I was writing the Cheese Shop Mysteries, I tasted over 1,000 cheeses. That was truly enjoyable. Now that I’m writing the Fairy Garden Mysteries, I’ve made over thirty fairy gardens. I have so much fun making them and tending to them. I go into my garden and I smile. My kids make fun of me. They think I’m slightly addicted. I probably am. But, hey, I have fairies in my garden. And butterflies. And hummingbirds. And whimsy. I adore whimsy.”

Learn more about Daryl Wood Gerber on her website at darylwoodgerber.com.

Welcome to Lake Te Anau, the home to this magnificent lake in New Zealand. We had a single night stop here and were scheduled to go to the bird sanctuary the following day. For this evening, after we’d had a fabulous dinner, we decided we needed to walk off all those calories. Our walk was easy, just across the road and then along a path. This is such an amazing and peaceful place. Enjoy the view!

In 1947, photographer and war correspondent Janey Everett arrives at a remote surfing village on the Hawaiian island of Kauai to research a planned biography of forgotten aviation pioneer Sam Mallory, who joined the loyalist forces in the Spanish Civil War and never returned. Obsessed with Sam’s fate, Janey has tracked down Irene Lindquist, the owner of a local island-hopping airline, whom she believes might actually be the legendary Irene Foster, Mallory’s onetime student and flying partner. Foster’s disappearance during a round-the-world flight in 1937 remains one of the world’s greatest unsolved mysteries.

At first, the flinty Mrs. Lindquist denies any connection to Foster. But Janey informs her that the wreck of Sam Mallory’s airplane has recently been discovered in a Spanish desert, and piece by piece, the details of Foster’s extraordinary life emerge: from the beginnings of her flying career in Southern California, to her complicated, passionate relationship with Mallory, to the collapse of her marriage to her aggressive career manager, the publishing scion George Morrow.

As Irene spins her tale to its searing conclusion, Janey’s past gathers its own power. The duel between the two women takes a heartstopping turn. To whom does Mallory rightfully belong? Can we ever come to terms with the loss of those we love, and the lives we might have lived?

My review of Her Last Flight

Beatriz Williams has done it again. History and mystery come together in this well-written tale that includes excellent dialogue, smooth exposition, and vivid descriptions. Once again, Williams has written a story that will keep readers engrossed until the end.

In Her Last Flight, there are chapters set decades apart that include different characters. This could have easily become quite confusing, but Williams tackled it smoothly. The author’s clear writing style eases the transitions between the decades and characters, and sets up twists that remain a surprise until the moment of the reveal. Bravo to Beatriz Williams for another outstanding entry in the historical fiction genre.

The great thing about these Chile-Lime Cream Fish Tostadas is that they’re light, but filling. In our house, we try to watch the fats so it was a challenge finding a recipe that didn’t call for a lot of mayonnaise to create the cabbage slaw that many recipes call for. You can get creative each time you make them and always have a slightly different presentation. 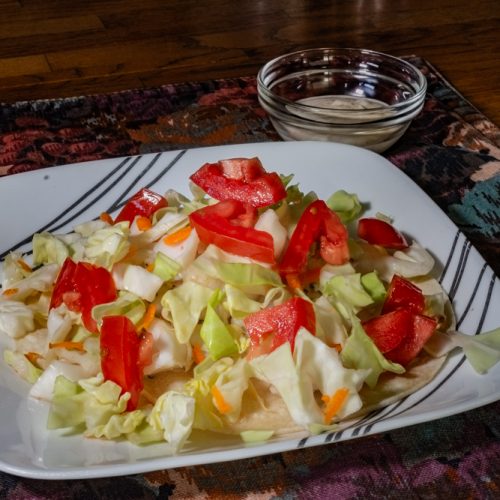 By using tortillas instead of a fried tostada shell, you’ll cut out a lot of fat and calories. You can serve these tostadas with your favorite accompaniments. Substitute for the avocado, tomatoes, and pepper sauce to meet your needs. Original recipe from bhg.com
Keyword Easy, White Fish

Last week I said I’d finished with my Milford Sound photos, but when I saw this one I decided I had to share one more. I’m always a sucker for great photo ops. When the light is perfect, I can’t help but give it a try. So, near the end of our ferry tour, the sun and the clouds cooperated to create this fabulous lighting and provide this Milford Sound postcard photo,