You are here: Home / New Authors / Behind the story of Ethan Justice with Simon Jenner
Spread the love 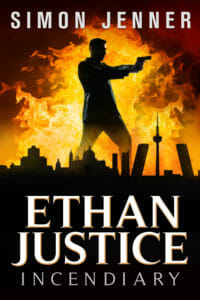 “I do try to stay current and include newsworthy topics in all of my stories,” said Jenner. “In the first book in the Ethan Justice series (‘Origins’) the main topics covered were the sex trade (i.e. vulnerable Caucasian women being sold overseas) and terrorism.  In the second book (‘Relentless’) I focused on criminal gangs in the United Kingdom and their recruitment of underage girls for prostitution.”

When he decided to write the third book in the series, “Incendiary,” he chose to deal with two topics: the Spanish criminal underworld and Muslim fundamentalism. When dealing with hot-button topics, Jenner prefers to keep the lines between good and evil very clear. He said, “I always paint heinous crimes as wrong no matter what drives a person or persons to commit such crimes. I don’t like to be lectured while reading and never try to force home any of my own beliefs into my writing.”

The driving force behind the Ethan Justice series was Jenner’s own frustration with a genre he’d been reading extensively. He said, “The series idea came to me after reading one too many books with ex-SAS, Delta Force, already proven, as-hard-as-nails bad ass protagonists. To be honest, their appeal (for me) was wearing a little thin.”

Armed with nothing more than a desire to create a more unlikely and realistic protagonist who could be thrown into difficult situations, he developed the character Ethan Justice. “My latest offering (‘Incendiary’) originated from a need to provide a new setting for Ethan Justice’s exploits. The previous book had ended with Ethan and Savannah taking time off in the Caribbean and I asked myself what would happen if their return flight got diverted and they were forced to do battle with an antagonist on foreign soil.”

Jenner had spent time in Spain and felt the country suited his requirements. With a location in mind, he settled into the task of researching the country and its problems. Jenner said, “I read up on Spain and the greatest challenges faced by its police force. Drugs and an increase in organized gangs of foreign criminals were recurrent themes, so I based the book around an ambitious UK national attempting to oust the Russian mafia in Spain.”

The result was an action thriller that Jenner says will “make you laugh, cringe, cry and cheer with heroes to care about and villains to despise.” That statement is a tall order to fill, yet the book is receiving excellent reviews on Amazon.

“I write with the everyman and everywoman in mind,” said Jenner. “My protagonists are everyday folks put in unique and extreme situations. I want my readers to be able to ask themselves, ‘What would I do?’ and ‘How would that make me feel?’.  I take my heroes to hell and back with the aim of dragging my reader along for the ride. There’ll be death and danger at every turn and an ending sure to satisfy those who want justice to prevail.  I’m the most sarcastic person I know and this tends to surface, somewhat toned down, in my writing.”

Jenner describes himself as a man whose goal in life is to discover his goal in life. He says that his wife won’t let him give up on anything and describes his son as “a dreamer just like me.” Jenner also owns a dog—or perhaps it’s the other way around because Jenner said, “He always looks at me as if to say, ‘I know more than you’.”

Learn more about Simon Jenner on his website at simonjenner.com.