You are here: Home / Author Interviews / Behind the story of The Cat in the Stacks mysteries
Spread the love 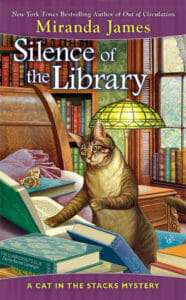 Miranda James is the pseudonym for Dean James, the New York Times bestselling author of the “Cat in the Stacks” cozy mystery series. For this profile and interview, James discussed the series and why he became a writer.

James was first influenced by mysteries more than forty years ago when he read Nancy Drew and many of the juvenile series books. He said, “I have a large collection of them, and I’ve learned a lot about their history over the years. I thought it would be fun to use that knowledge in the plot of a book.”

“I have wanted to be a writer since I was twelve years old,” said James. “When I penned my first book, which was really a novella. It was highly derivative of Nancy Drew and Trixie Belden, my two favorite mystery series at the time. I even submitted it to a publisher, but when I received a form rejection letter, I put my writing career on hold for a few decades. Perseverance pays off, though; since 2000 I have published 19 mystery novels, and there are more under contract to come in the next few years. I write characters that I enjoy spending time with, and I hope readers will enjoy them as I do.”

Readers in the cozy mystery genre have certain expectations, and James’s efforts to satisfy those readers have been rewarded with multiple appearances on the New York Times Bestseller list. He said, “My books feature an amateur sleuth and are intended for entertainment. I write in the cozy mystery tradition: no sex, no explicit violence, and no gore. I do my best to create entertaining stories with engaging characters and strong puzzles.”

While some authors are out to make a statement about social causes or human behavior, not so with James. “I don’t have any particular issues or arguments to make in my books,” he said. “They are intended for entertainment. The stories are frequently about families, however, and how past actions can impact the future.”

“Silence of the Library” begins during National Library Week with the Athena Public Library planning an exhibit to honor the centenary of famous novelist Electra Barnes Cartwright—creator of the beloved Veronica Thane series. When news leaks that the author could be at the exhibit, series devotees and book collectors converge on Athena.

James describes “Silence of the Library” as “crazy collectors turning up when a reclusive children’s author comes out of hiding.” He added, “It’s not long before murder makes an appearance as well.”

Dean (Miranda) James is a seventh-generation Mississippian long transplanted to Texas, Dean is a medical librarian and bookseller as well as a writer. He has two cats (neither of them a Maine Coon) and thousands of books. Learn more about Dean James on his website at www.catinthestacks.com.