You are here: Home / Author Interviews / Behind the story with NYT bestseller Allison Brennan
Spread the love 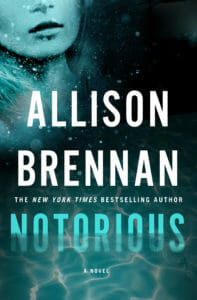 What will a New York Times bestselling author who has written twenty-three novels do to make her books accurate? For Allison Brennan, the author of “If I Should Die” and “See No Evil,” that answer is to travel far and wide. In this interview, Brennan discusses her upcoming release “Notorious” and what her life is like as a full-time writer.

Brennan, who really does love her job, quipped, “I have no life! When I first started writing, I didn’t watch television for three years. For me, that was a huge sacrifice because I’m a TV addict. I consider myself blessed that I love what I do.”

Today, the schedule Brennan keeps is rigorous, involving the research and writing of three books each year. She said, “Everything I do is either writing or kid related—and with five kids, I keep busy. I live vicariously through my characters. I love research and have traveled near and far to ‘get things right.’ For example, every year I participate in the annual SWAT training exercises put on by the Sacramento FBI—I’m a role player, either a hostage or a bad guy, in a variety of scenarios. The farthest I’ve traveled for research is the FBI Academy at Quantico—twice.”

“Notorious” is the first full-length novel in the Max Revere series and is due for release on March 25, 2014. For those who can’t wait until March, Brennan is also releasing a prequel novella titled “Maximum Exposure” on February 4. Brennan describes herself as an author who is not out to write about specific issues. “I don’t have any big cause I’m trying to sell to people,” she said. “But all my books have an underlying message of justice. Unsolved crimes have always bothered me—that someone has gotten away with destroying the lives of others.”

With that concern for justice in her writing toolkit, Brennan created protagonist Maxine Revere, who has dedicated her life to investigating murders the police have long since given up any hope of solving. Brennan describes Max as “a nationally renowned investigative reporter with her own TV show and a tough-as-nails reputation.”

Brennan said, “I took the theme [of justice] and expanded it—Max is borderline obsessed with finding the truth about cold cases. She has cold cases in her past—her mother disappeared, her best friend in high school was murdered, her college roommate disappeared. All these have created a driving need in Max to find the truth in every lie. I think this comes from my own personal frustration that unsolved crimes impact not only the victim, but the friends and family of the victim.”

Another New York Times bestselling author noted for her pulse-pounding plots, Lisa Gardner, said “Notorious” is “Guaranteed to keep you up late at night.” Brennan created that intensity by playing the “what if” game. She said, “What if your best friend was murdered and your other best friend was accused of the crime? What if there was a hung jury and you believed your friend was innocent, but everyone else thought he was guilty? All I knew when I started writing the book was that Max was coming home for a funeral, and would stay to solve this cold case of her best friend’s murder. When she left 13 years ago, she was young and without experience. Now, she’s an investigative reporter with four true crime books and hundreds of articles. I didn’t know what was going to happen, I only knew the set up.”

One of the words that might be used to describe Brennan as a writer is relentless—she’s relentless in her search for accuracy, detail, and plots that raise the reader’s pulse. That intensity carries over into her personal life. Brennan said, “Once, at a dinner party with my husband’s boss, the boss’s wife asked me about what I was currently writing. I told her about my recent trip to the morgue, describing in detail what it was like to walk through the crypt, to view a body that had been submerged in water for an extended period of time—which was important to the book I’d been working on at the time. My husband started kicking me under the table and I looked around and realized that no one was eating. Whoops.”

Maybe that conversation was a dinner-talk faux paux, but it’s very likely Brennan picked up some new readers the following day.

Learn more about Allison Brennan on her website at allisonbrennan.com.