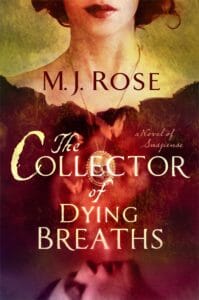 The latest novel from international bestselling author M.J. Rose, “The Collector of Dying Breaths,” has just been released. For this interview, Rose talked about what was behind the novel and how she became fascinated with the concept of souls leaving a body with the dying breath.

Rose was doing research on another book when she learned that Thomas Edison and Henry Ford, who both believed in reincarnation, supported the idea that in death, the soul leaves the body with its last breath. Rose said, “Edison’s dying breath, collected by his son, Charles, is in fact on display at the Edison Winter Home in Fort Myers, Florida.  I was totally taken with the idea of our souls being expelled in that last breath and it became the thesis of my novel.”

“There is a lot of fact mixed in with this fictional tale,” said Rose. “The main historical character is a 16th century perfumer named René le Florentin, who was an apprentice at the Officina Profumo–Farmaceutica di Santa Maria Novella, one of the world’s oldest pharmacies. Founded in 1221 in Florence by the Dominican Friars, the pharmacy was famous for its herbal remedies and potions.”

“When Catherine de Medici was young she bought scents and creams there. And when the fourteen-year-old duchessina traveled to France to marry the prince, she took René with her. He and Catherine are credited with bringing perfume to their newly adopted country.”

As part of her research for the book, Rose found many fascinating practices. She said, “There was an ingredient used in perfumes and remedies in the middle ages called ‘momie’ that is certainly one of the most fascinating I’ve come across.

“Momie is found in the tombs of the people who have been embalmed with spices, as they used to do in ancient times. It’s found near the brain and the spine. Instruction manuals from the 15th century suggest it should be shining, black, strong smelling, and firm. And that the white kind, which is rather opaque, does not stick, is not firm and easily crumbles to powder, must be refused.”

Rose did extensive research on middle age practices because she wanted the science to be historically accurate. When it came to dialogue, however, she chose a different path. “I read as much as I could get my hands on of things written during the period. But this is fiction and I wanted it to be a good read so in the end I closed all the research books and wrote from the characters mind. After all, there’s no one alive who knows for sure how people sounded in conversation in the 1500s. We only know how they wrote.”

Through the ages, the concept of reincarnation and other worlds has fascinated mankind. Rose wanted to look closer at this fascination. She said, “I was exploring this idea, expressed so well by H.G. Wells.

‘You may think me superstitious, if you will, and foolish; but indeed, I am more than half convinced that he had, in truth, an abnormal gift, and a sense, something—I know not what—that in the guise of wall and door offered him an outlet, a secret and peculiar passage of escape into another and altogether more beautiful world.’”

With all of her research into past lives and reincarnation, would Rose want her dying breath captured for possible reincarnation? She said, “I think that we need to live our lives for the present . . . as if it is our one and only wild and wonderful life. If it turns out we do get to come back then I’d want to start fresh and so I hope my last breath is expelled near an open window on a balmy night so that it can blow away and mix with the stars.”

M.J. Rose is the international bestselling author of fourteen novels, one of which, “The Reincarnationist,” was the basis of the television series “Past Lives.”