You are here: Home / Books - Featured / Review of ‘No Stone Unturned’ by James W. Ziskin
Spread the love 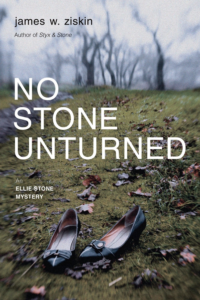 “No Stone Unturned” is James W. Ziskin’s second Ellie Stone Mystery. This 1960 noir novel is set in small-town New Holland upstate New York. New Holland has all the classic small-town characteristics where the locals know everyone and most “secrets” are known by many. Ellie has to fight for her position as a news reporter at The New Holland Republic and suffers the consequences typical of a woman doing a “man’s job” in the 1960s work place.

When Ellie hears on her police scanner that a body has been discovered in the woods just off Route 40 she races to the scene, hoping this will be her big break. Prepared with her camera and questions about who, what, when, where and how, Ellie investigates the murder of twenty-one-year-old society girl, Jordan Shaw, daughter of a respected judge.


Ellie’s search leads her to a second murder in Boston, the roommate of Jordan Shaw. With more questions than answers, Ellie follows each lead to what appears to be a dead end. With no where left to turn Ellie plots a scheme to flush out the killer, putting her own life at risk.

James W. Ziskin has created a solid plot that takes the reader on a 1960 mystery adventure through the eyes of Ellie Stone. The descriptions of 1960 gadgets and life, everything from typewriters instead of computers to rotary phones to phone booths, all help to immerse the reader in that era. Ellie is a well developed, likable person, with her fair share of character flaws that make her a realistic character. The descriptions of upstate NY and New Holland make the reader feel they are right there with Ellie cheering her on to make sure she leaves “No Stone Unturned.”