You are here: Home / Author Interviews / Behind the story of Identical with Scott Turow
Spread the love 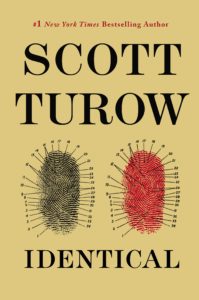 In this interview with Scott Turow, the author of nine bestselling novels and two nonfiction books discusses what was behind the story of his latest novel, “Identical.”

Booklist began their review of “Identical” by saying, “Turow continues his obsession with innocence (his breakout first novel, ‘Presumed Innocent,’ 1987, was followed after 20 years by ‘Innocent’).”

“Obsession” is a strong word to use in describing a writer’s work, but Turow did return to familiar ground with “Identical.” According to Turow, that return comes from his interest in people. “Zola and Ayn Rand notwithstanding, I think fiction generally is not well-suited to narrow arguments. Its main role is to illuminate conflict and ambiguity, which can seldom be reduced to slogans. My novels are about people first.”

When writing about people and conflict, what better inspiration than two people who are exactly alike, but caught in completely different situations? “There are several sources [of inspiration] that bound themselves together: a lifelong preoccupation with twins and identical twins in particular, which led me back to the Greek myth of Castor and Pollux. A desire to write about a politician who is basically a decent guy. And the long-unsolved murder of one of the identical twin daughters of Charles Percy, then a candidate for US Senator, only weeks before the election that Percy ultimately won.”

“Identical” also allowed Turow to delve deep into the world of politics and ambition. “I am a longtime antagonist to the argument that spending money on politics is a form of free speech that is not subject to regulation. ‘Identical’ certainly illustrates the extremes we’ve reached, with an eccentric billionaire, on the basis seemingly of no more than a hunch, filling the airwaves with commercials accusing a mayoral candidate of murder.”

Shortly after its release, “Identical” reached #2 on the New York Times Bestseller list and continues as a strong seller.

Scott Turow’s books have won a number of literary awards, including the Heartland Prize in 2003 for “Reversible Errors,” the Robert F. Kennedy Book Award in 2004 for “Ultimate Punishment” and Time Magazine’s Best Work of Fiction, 1999 for “Personal Injuries.” Learn more at www.scottturow.com.