What’s with this media war pitting Apple vs Facebook?

Have you ever felt as though your phone is stalking you? Visit a website for cookware and suddenly cookware ads are popping up everywhere—in your apps, on the web—everywhere. Welcome to the world of targeted ads, also known as personalized ads. And it is, in some senses, a creepy world to visit.

A small code on your phone makes targeted ads possible. In recent years, companies such as Facebook have used that code to track your every move on your phone. When Apple announced it would give users the option to restrict usage of this tracking code, Facebook’s CEO Mark Zuckerberg must have had visions of users gleefully hitting the ‘do not track me’ option and decimating the company’s advertising revenues. As a result, Facebook declared a media war on Apple and claims IOS 14.5 will wreak havoc on small businesses by making it harder for them to compete.

Let’s begin by putting reasons for the Apple vs Facebook media war into perspective. In 2020, Apple had the largest market capitalization of any company in the world. Not far behind was Facebook, who ranked number seven. That’s right, we’re talking about two of the largest companies on the planet. Apple’s market value is more than $2 trillion dollars, while Facebook is worth a mere $860 billion.

Apple’s revenues in 2020 were about $270 billion. Those revenues came from the sale of products and services. Facebook’s revenues were a mere $86 billion and largely came from advertising. Obviously, Facebook has the most to lose in this battle. In a mystery, we would call that motive.

Over the years, Apple has shown a commitment to consumer privacy. To be fair, the company may also have a small profit motive if their decision can cause more apps to turn to subscriptions in the App Store. It’s a stretch, but it is possible.

Contrast Apple’s history against a company whose purpose has been to encourage people to share everything going on in their lives—and whose track record at keeping user data safe is weak. With Facebook, everyone can restrict what information of theirs they display on their timeline, but this free and willful sharing of personal interests isn’t where the problem lies.

Behind the scenes, Facebook sells your information to advertisers and data brokers. They do this so you see what Facebook calls personalized ads. I used to buy Facebook ads to promote my books. I would target Facebook users who liked certain authors or were in a specific demographic group based on age, sex, marital status, education, etc.

Seems like a good deal for everybody, right? Advertisers get to sell more stuff. You see ads personalized to your interests. And Facebook makes a boatload of money.

It all comes down to whose rights take precedence? Yours? Or those of advertisers?

Advertising dollars — the root of the problem

I’ve heard plenty of Facebook ads about how they’re looking out for small businesses and providing consumers with ads that meet their needs. But what those ads don’t mention is that while a small business might sell more of their products, all those advertising dollars are helping Facebook maintain its position as one of the world’s largest tech companies.

How to manage tracking on IOS

The bottom line is IOS 14.5 may affect Facebook’s advertising revenues. One of their big corporate goals is to convince you, their user, that you should allow them to continue to track and sell your information. Whetheryou want to see personalized ads is up toyou, and the following steps will help manage your preferences to either avoid or allow tracking in IOS 14.5.

While you’re here, why not check out last month’s tip, Avoiding scams in the age of Covid-19?

We’re gradually adding in more vegetarian dishes to our weekly menu, and that means we’re always on the lookout for tasty veggie-based dishes. This Cajun Veggie Pasta is a delightful blend of blackened bell peppers and mushrooms along with a spicy sauce and pasta. Talk about a winning combination!

The original recipe came from FoodNetwork.com, but by the time we’d finished sitting down at the table, it had taken far longer than their time estimates. As a result of misinterpreting the recipe, the veggies cooked too long and were a bit overdone. And, because the veggies and sauce took longer than anticipated, the gluten-free pasta sat around too long. So, with those lessons in mind, here’s the modified recipe along with a few tips to save you time and make the dish a little healthier.

The original Cajun Veggie Pasta recipe has a lot of fat and carbs. You can eliminate some of that by using milk instead of cream and adding in some cornstarch to thicken. On the taste front, keep in mind that the goal of blackening those veggies is to add some flavor, not cook them. The veggies will have plenty of time to cook once you add the liquid. And finally, don’t start cooking the pasta right away. Bring the pasta water to a boil, but then turn off the heat and put a lid on it. (I know, bad cliché, but fun.) When you’re about ten minutes out, crank up the heat and start cooking the pasta. If you’re timing is good, the pasta will be ready just in time to add it to the sauce.

Like the looks of this recipe? Check out my recipes page for more. Also, have you subscribed to The Snitch? It comes out once a month on the first Sunday and includes a scam tip, a recipe, and contest info! 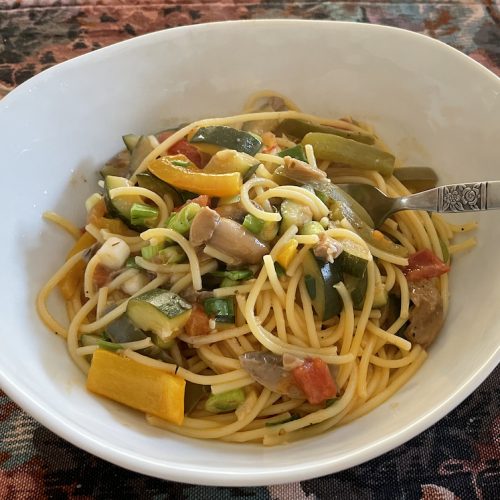 The trick with this recipe is to not cook the bell peppers and mushrooms, but to blacken them. To do this, you need a high heat and short cooking time.  Lower fat option: Substitute milk for the heavy cream and thicken with a 1 tbsp. cornstarch and 1 tbsp water mixture. Original recipe from foodnetwork.com
Keyword vegetarian

I’m always enthralled by a good sunrise, but there’s something truly special about an early Hawaiian sunrise. And this one, our first after sailing from Australia, did not disappoint.

Over the past couple of weeks I’ve shown what the view was like on the last morning of our cruise. This early Hawaiian sunrise was, of course, spectacular. On this morning, we’d spent a month on the MS Noordam. In some ways, it had become a little traveling home with good food, good service, and plenty of people to talk to. With all those things going for our time on the ship, we were anxious to get back on land. And because we were docking in Honolulu, I was especially excited.

When I woke up and discover that the skies were clear and there were clouds on the horizon, I was in my little photographer’s heaven zone. Those who take lots of photos know the feeling—something good is going to happen and you want to capture it. With that in mind, let’s celebrate the sunrise with a few shots regardless of their location. And if you need a little more Hawaii, try my Trouble in Paradise Pinterest board.

Want to see more photos from our trip? Here’s a link where you can check out all the entries in our travel journal.

It’s launch day for Treasure Most Deadly, and for all you Seaside Cove fans, I want to say a big thank you! The book is finally here and the reviews from the advance readers are wonderful! They’re calling it a “compelling read” and a “fantastic book in a great series.”

Treasure, murder, and a plot to steal it all…

Seaside Cove Bed & Breakfast owner Rick Atwood is again called on to assist his friend, Chief of Police Adam Cunningham, with a murder investigation. The case seems straightforward enough. Clive Crabbe, who has a quick temper and a strong jealous streak, was found hunched over the victim after the man made advances toward Clive’s ex-wife.

A murder investigation is the last thing Rick wants right now. The B&B is booked solid. The town is inundated with tourists and news reporters chasing stories about treasure thieves. And Rick’s wedding to Marquetta Weiss is just weeks away. As if that wasn’t enough, Rick’s eleven-year-old daughter Alex is not only itching to help the cops solve another murder, but she’s forming an unhealthy friendship with a B&B guest.

As the murder investigation progresses, Rick realizes Alex’s new friend could be at the center of everything. The worst part is that Alex may be the one person capable of cracking the case.

Buy Treasure Most Deadly Now on Amazon – $3.99
No post found

Praise for other books in the series:

A Treasure to Die For: “Right smack out of the gate this debut cozy is a winner.” — Laura Childs, New York Times Bestselling Author

The Killer Christmas Sweater Club: “I am completely smitten with everything about this mystery book, and if Hallmark is looking for a cozy mystery to turn into their next best-selling series of films, look no further!” — My Devotional Thoughts

From May 4 through May 17, Treasure Most Deadly will be featured on the following blogs. Be sure to visit each one to maximize your chances to win that gift card! I’ll update this post each day of the tour with a link to make it easy to enter.

May 4 – Escape With Dollycas Into A Good Book – REVIEW