You are here: Home / Reviews / Review of The Subject of Malice
Spread the love 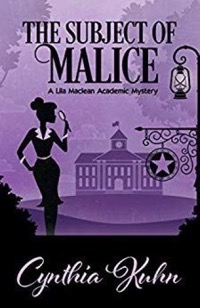 The organizers have rustled up plenty of surprises for the literary conference at Tattered Star Ranch. But the murder of an influential scholar wasn’t on the program—someone has clearly taken the theme of Malice in the Mountains to heart. This shocking crime is only the beginning: Other dangers and deceptions are soon revealed.

English professor Lila Maclean has a full agenda: She must convince a press to publish her book (possibly), ace her panel presentations (hopefully), and deal with her nemesis (regrettably).

However, when Detective Lex Archer requests Lila’s academic expertise, she agrees to consult on the case. While her contributions earn high marks from her partner, it could be too late; the killer is already taking aim at the next subject.

As Lila races to keep her colleagues alive, publish or perish takes on new meaning.

My review of The Subject of Malice

With multiple plot lines—one for the murder, one for the romance, and one based on good old-fashioned greed—The Subject of Malice has a lot going on. The storylines, which ultimately converge, are balanced well and all proceed at a good pace.

There’s no shortage of odd characters in this story, either, which makes one wonder exactly how many of them are based on real academics. In fact, it was easy to identify personality types everyone has likely met…and disliked. Lila is a likable character, and I found it easy to identify with her struggle balance her personal and professional lives. I felt Lila should have done a better job of standing up for herself at times, but the truth is her reactions were often an accurate reflection of how many people react to stressful situations.

Overall, The Subject of Malice is an entertaining read with twists and turns peppered throughout.