You are here: Home / Archives for book review

Avalon is on the run from her life in Los Angeles. Having a drink while waiting to change trains in the former Olympic town of Tranquility, New York, she discovers the freshly murdered bartender at MacTavish’s. A bartender herself, she’s offered the position with the warning he wasn’t the first MacTavish’s bartender to meet a violent end.

Avalon’s superpower is collecting people’s stories, and she’s soon embroiled in the lives of artists, politicians, ghost hunters and descendants of Old Hollywood.

My review of Death in Tranquility

I found a lot to like about Death in Tranquility. Written from a first-person point of view, the main character, Avalon, is smart and funny. The atmosphere of the small town of Tranquility exudes charm, friendliness, and a hint of unrest that unfolds as the story progresses. All-in-all, death in Tranquility seems like a natural thing.

The writing is sharp and to the point without a lot of over-the-top introspection. That’s not to say there aren’t any, but those moments of inner monologue felt well-placed and succinct. The author introduces characters and facts as needed, making their introductions seem natural.

With multiple plot lines slowly converging, the pacing is solid throughout the story. The dialogue is also well done. Speaking of which, there were a few instances of profanity in the middle of a high-tension scene. While not much, it was a surprise in a book that was otherwise squeaky clean.

Overall, this one gets solid marks as a good read and makes me want to visit Tranquility again.

Learn more about Sharon Linnea on her website at sharonlinnea.com. If you liked this review, why check out some of my others here.

From the publisher of Slightly Murderous Intent

There’s a shooter on the loose who keeps missing his target. But that doesn’t stop him from trying again…and again. It’s up to rookie lawyer and spunky sleuth, Corrie Locke, to find the gunman before he hits his mark…D.A. James Zachary, Corrie’s hunky and complicated frenemy.

When Corrie is stuck with more questions than answers, she enlists a team with various strengths, weapons and cooking skills to help her find the shooter. Computer whiz/boyfriend Michael is onboard. So is former security guard, Veera. Toss in an over-the-hill informant and a couple of feuding celebrity chefs and Corrie’s got her very own A-Team. Okay, maybe it’s more like a B-Team.

Can Team Corrie hunt down the shooter before he scores a bulls-eye?

With nonstop action and twists galore, Slightly Murderous Intent kept me entertained from beginning to end. Corrie’s a delightful protagonist with a can-do attitude and a closet full of weaponry, which kept me wondering which trick she’d pull out of the bag next.

The writing style is fast and well-paced with dialogue playing the starring role. While I love that writing style, there were a few times when I had to backtrack because the descriptions of action were a little too sparse. Even with those few little hiccups, I was on board with Slightly Murderous Intent from beginning to end.

Overall, this is a solid entry in the light mystery genre with a strong female lead that can wield a shuriken as well as she can a pair of heels. There were a few developments at the end that might set things up for the next book in the series, which is one I’m looking forward to.

Available in both Kindle and soft cover on Amazon.com.

From the publisher of Pharoah’s Forgery

After some of Karina Cardinal’s recent adventures—her lover Mike Finnegan would call them scrapes, jams, or pickles—she’s more than ready to blow this D.C. pop stand for a short girls’ trip to Mexico. Until Jillian’s roller skate wreck blows their plan out of the water. With Jilly injured and Mike working, her fellow lobbyist Rodrigo volunteers to share some sun, sand, and margaritas in Cancun. It’s tough to relax, though, knowing what’s in her suitcase. A package she promised to hand off to Mrs. Thundermuffin in Mexico. Mrs. T’s evasive maneuvers around Karina’s questions wave more red flags than a bullfighter, leaving Karina no choice but to take a peek. Okay, so it’s not a kilo of something illegal. It’s an Egyptian death mask that turns out to be a magnet for crooks, conmen, kidnappers, and outright killers. When the situation explodes into chaos, Karina and Rodrigo are lucky to have friends in the right place—at their backs. But they’re in one hell of a jam. And they could be going home in something tackier than a souvenir t-shirt—more like a body bag.

I love it when a story begins with the main character doing something nice and it later comes back to bite them. In this case, the something nice was delivering a package for Karina’s neighbor. That favor kicked off a wild ride an adventure from beginning to (almost) the end. Unfortunately, the main story seemed to culminate about 3/4 of the way through. While this was really just a twist in the story and there was still some tension, it took a while for the pacing to ramp up again. With that one exception, this was a joy to read with mystery and mayhem at every turn. This one’s a clear winner for anyone who likes well-written action scenes, crisp dialogue, and plenty of twists. 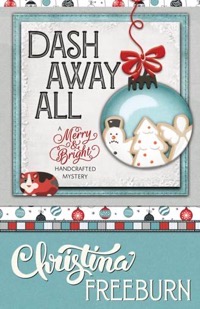 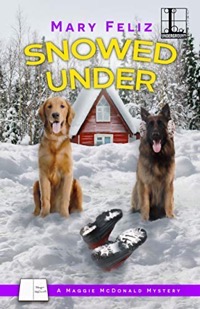 m the publisher of Snowed Under

When professional organizer Maggie McDonald finds a body in a snowdrift outside her friend’s ski cabin, she must plow through the clues to find a cold-blooded killer . . .

Lake Tahoe in February is beautiful, but Maggie can’t see a thing as she drives through a blinding blizzard with her friend Tess Olmos and their dogs, golden retriever Belle and German shepherd Mozart. Maggie has offered her professional decluttering skills to help Tess tidy up her late husband’s cabin in preparation to sell. She also plans to get in some skiing when her husband Max and their boys join them later in the week.

What she doesn’t plan on is finding a boot in a snowdrift attached to a corpse. The frozen stiff turns out to be Tess’s neighbor, Dev Bailey, who disappeared two months ago. His widow Leslie expresses grief, but Maggie can’t help but wonder if it’s a snow job. As more suspects start to pile up, things go downhill fast, and Maggie must keep her cool to solve the murder before the killer takes a powder . . .

My review of Snowed Under

There were plenty of things to like about Snowed Under. It’s chock full of good tidbits about dealing with winter in snow country. There’s plenty of action to offset the feeling that this is, in a sense, a type of locked room mystery.

As for why the police would accept an amateur sleuth into a police investigation—well, that’s just part of the territory for cozy mysteries. And, true admissions time, the story held my interest until the killer was exposed. Partially because I never figured out who the killer was until Maggie put the pieces together.

Learn more about Snowed Under or Mary Feliz at maryfeliz.com 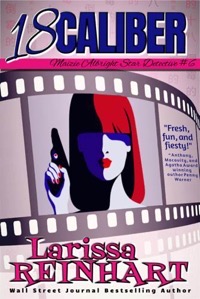 LUCKY IN LOVE AND LUCKY TO BE ALIVE. UNTIL NOW.

Maizie’s mixing with international stars, spies, and her mother’s dark past in her sixth case in The Wall Street Journal bestselling series.

#WannabeDetectiving While ex-celebrity Maizie Albright’s dreams of becoming a for-real private investigator have not exactly been dashed, they have been slightly thwarted. Her ex-manager and still-mother, Vicki Albright, has taken the helm of Nash Security Services while rebuilding her entertainment management company. Sometimes with the same clients. Like Chinese action star, Lili Liang, who’s making the film Unlucky 18 in Georgia.

Thus far, Lili’s living up to her movie title. Her kung fu coach is missing. Her boyfriend’s disappeared. And her director, who gambled on her with the part, might be gambling with her life.

Maizie’s luck is also running out. Maizie and Nash find themselves struggling to balance a new partnership and new relationship between missing persons’ cases, wild goose chases, and tracking a bullet into dangerous places. Sometimes it’s enough to make a girl NOT want to put a ring on it. When it comes to facing an 18-caliber killer, what will Maizie put up as the target? Her heart or her life?

18 Caliber was my first Maizie Albright Star Detective Mystery—I’m hoping it won’t be my last. I loved this former child star who’s trying to make a new life for herself as a detective. She’s spunky, but broken; beautiful, but insecure; and comes with an A-list cast of supporting characters.

The dialogue is snappy with a nice blend of introspection, so the plot keeps moving. And speaking of plot, there are plenty of twists to keep the reader guessing who’s who and whodunwhat. I did find Maizie’s mother’s narcissism a bit over the top at times. But while I ranked her high on my dislikable character scale, I sadly found her behavior believable. After all, mothers come in all flavors and I could definitely see such a parent in a real-life setting.

This was a fun read—a fast-paced caper that kept me entertained until the end.