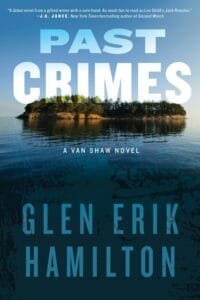 Glen Erik Hamilton is a debut novelist with a thriller that has been receiving critical praise. In this interview, Hamilton talks about the book, “Past Crimes,” and how his childhood around Seattle’s docks is involved.

Hamilton said that one of the reasons he wrote “Past Crimes” was to capture a moment. “Seattle is in the midst of an economic surge–the latest in a history that includes Boeing, Microsoft, the tech boom, etc.–which is changing the city radically. Moving away from the city made me want to write about that, and how returning to a place can make you see it with different eyes.”

As a reader who loves crime and mystery thrillers, Hamilton instinctively knew which genre to write. “I became especially interested in telling a story about someone who had been raised with different values of right and wrong. How that person thinks about crime–and about the idea of justice–would be notably different, especially if they are implicated themselves or they have a personal stake in the mystery.”

[contestad code=VanShaw startdate=2015-04-12 enddate=2015-04-22]Reviewers cite a strong sense of place in their reviews. But, other than setting, the Seattle native who lived aboard a sailboat as a boy and grew up around the marinas, commercial docks, and islands of the Pacific Northwest, says there’s not much in his past that relates to the plot in “Past Crimes.” He quipped, “I don’t research crimes by committing them. I just want that on the record, in case there’s any question later.”

Having broken into the traditional publishing world, Hamilton offers advice to aspiring writers. “Go for it! Take a class, join or form a writing group, read your work out loud, go to conventions, and keep plugging away. Don’t get discouraged when you have a bad day of writing. The important thing is that you wrote that day. Make tomorrow another one.”


Now a resident of California, Hamilton is enjoying writing, but looks back fondly on his youth. “One of my favorite moments was while traveling with my parents one summer in the San Juan Islands. I watched my mother, who loves animals, spend half an hour moving extremely slowly to get close enough to a blacktail doe to take a decent picture. When the doe finally spotted Mom, she trotted right up to Mom and waited patiently to see if a treat was forthcoming. That’s when we realized just how tame deer can get in a nature preserve with no predators.”

Hamilton added, “But honestly, my best times were just running around the islands and marinas, and the occasional restricted merchant shipping area. Some kids play in alleys, I played on docks.”

Learn more about Glen Erik Hamilton on his website at www.glenerikhamilton.com.