You are here: Home / Author Interviews / Behind the story of Die Again with Tess Gerritsen
Spread the love 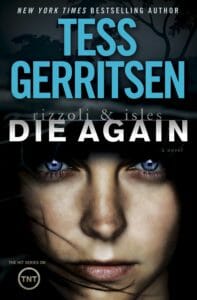 Enter to win in this month’s Book & a Latte Contest – details below.

For millions of fans, the name Tess Gerritsen is synonymous with “Rizzoli and Isles.” The odd thing is, the bestselling series that spawned a syndicated television show and all those fans began with a different set of characters in mind and only became what it is thanks to Jane Rizzoli’s dogged perseverance. In this interview, New York Times Bestselling author Tess Gerritsen, we’ll go behind the story of Rizzoli and Isles and discuss her latest novel in the series, “Die Again.”

Gerritsen said she tries to avoid writing about issues. “I think that it kills the fun of a novel when you feel the author is trying to foist some personal agenda on you. I’m more of a ‘hey, check out these cool facts!’ writer. In previous books I’ve explored Egyptian mummies, shrunken heads, space biology and leprosy.”

“Die Again” will be no different in that respect according to Gerritsen. “I explore the biology and behavior of cats—in particular leopards, whose hunting behavior may have influenced early human evolution. Maura gets an up-close look at cat behavior when she adopts the pet of a murder victim, and realizes that even your average pet kitty is in truth a ruthless predator.”


The trigger behind “Die Again” was an African safari Gerritsen and her husband went on a few years ago. They were  assigned a bush guide, who was responsible for their safety. They were also warned to remain in the jeep and to always do as they were instructed by the guide. The incident that gave Gerritsen the idea for the novel came one afternoon at sunset when the group stopped for cocktails. Her husband needed a bathroom break and began walking toward a set of bushes.

“Our guide told my husband to go in the opposite direction, which the guide felt was safer. Less than a minute later, a leopard walked out of the bushes my husband was originally going to use. At this point, we were all out of the jeep, and the leopard was approaching. Our guide calmly placed himself between the leopard and us, and stared down that cat, which retreated back into the bush. In a place where danger seemed to be everywhere, that guide kept us safe.

“That was what launched the story of ‘Die Again’ for me: the thought of being stranded in a hostile place and forced to rely on one man to keep us safe—a man who might not be who he claimed to be.”

The Rizzoli and Isles series has brought readers a pair of unlikely friends who work very well together. Judging by the popularity of both the books and the television series, readers and viewers alike love the strange mix of the abrasive Jane with the brainy Maura. Those characters, however, were not in Gerritsen’s original plan, who said, “The creation of Jane was an odd accident in fiction. When I introduced her in ‘The Surgeon,’ she was a minor character. The instant she walked on the page and started annoying everyone, I wondered why she was so annoying.”

At first, Gerritsen wondered why Jane was so unlikeable. “I thought she was destined to die near the end of the book, but as I spent time with Jane, I started to understand her and sympathize with her status as outsider. And when it came time to kill her off, I couldn’t do it. She fought back against her creator and survived. Which made me want to know what happened to her next, and spawned the next book in the series.”

Long-time fans will know that Maura wasn’t even introduced until the second book in the series, “The Apprentice.” Gerritsen said of Maura Isles. “From the start, she was a mystery to me, a woman who kept her secrets close to the vest. Which made me want to know more about her, so I wrote ‘The Sinner.’ Out of two minor characters, a series was created.” Fans will be pleased to know Jane and Maura still fascinate Gerritsen. 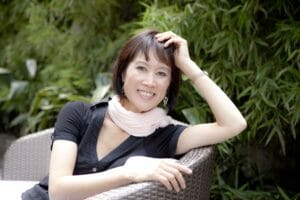 “After eleven books, I know Jane and Maura pretty well, but they still surprise me sometimes. Maura in particular still holds mysteries for me. She’s such an intelligent woman, yet she makes some pretty unwise personal choices, like falling in love with the wrong man. I’ve known women just like her, women who should know better, but who get sucked into romantic relationships that can only end badly. Will she ever find happiness? I don’t know. That’s why I write the books—to find out what this troubled friend of mine will do next.”

In addition to fans loving the two main characters in the series, another reason Rizzoli and Isles books are popular has to do with the details Gerritsen writes into her novels. “I am an insanely curious person, and an enthusiastic traveler, and both those qualities fed into the writing of ‘Die Again.’ Wherever I go, I pay attention to what scares me, and frightening incidents—like the leopard in the bush—often end up in my books.

“One scene in the book required a bit of gruesome personal research. I actually did butcher a deer carcass. It was bloody, exhausting, messy work and I came away from the experience with a greater appreciation of those who bring meat to our tables. I’m not a hunter, but I am a carnivore, and I feel it’s my responsibility as a meat-eater to understand where my meal comes from, and the labor that went into producing it.”

Just as a leopard walking out of the bush in Africa became a triggering incident for the plot behind “Die Again,” the writing of the novel was not completely predictable for Gerritsen. “The killer was a surprise to me. I had pegged a different character as the killer when I first started writing the story, but as the tale took on more and more complexity, I realized I had the wrong suspect. It’s often that way when I write my first drafts. The twists surprise me.”

Learn more about Tess Gerritsen on her website at tessgerritsen.com.

What: This month, Tess is giving away two hardcover copies of “Die Again” and I’m adding two $5.00 Starbucks gift card. Two random entries will be chosen as winners. Each winner will receive a book and a gift card.

Verification of entries: All winning entries are subject to verification.