You are here: Home / Author Interviews / Behind the story of Scorched Eggs
Spread the love 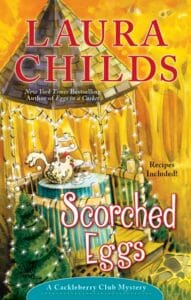 Laura Childs is the New York Times bestselling author of the Cackleberry Club Mysteries, Tea Shop Mysteries, and Scrapbook Mysteries, and a recent recipient of the Romantic Times Book Review’s Award for Best Amateur Sleuth. Her latest release in the Cackleberry Club Mysteries is “Scorched Eggs.” The title may seem a bit odd, but as Childs explains in this interview, she knew exactly what she was doing when she titled the book.

“I would have liked to see the look on my editor’s face when I sent him my proposal and three sample chapters,” said Childs. “His first reaction was, ‘Eggs? She’s going to write about eggs?’ But it all worked out just great—in fact, four of the Cackleberry Club Mysteries have made it onto the New York Times bestseller list.”

The Cackleberry Club Mystery series is called a hybrid novel. The books have the setting and characters of a cozy, but maintain the pace of a thriller. The result is a book Childs likes to call the “thrillzy.” She said, “It’s a term I coined six years ago and marketed aggressively—and that a lot of other authors have started using themselves.”


The main character in “Scorched Eggs” is Suzanne, who is ably assisted by her friends Petra and Toni. Childs said, “Suzanne is an intelligent, focused amateur sleuth who doesn’t rely on coincidence or sloppy police work to solve crimes. In fact, Suzanne is buckthorn in the side of Sheriff Doogie, who does his best to solve big city crimes that take place in the small town of Kindred.”

One of the choices Childs faced when she began writing the series was whether to situate her stories in a real town or one of her own design. She said, “I grew up in a small Midwestern town and I wanted to recreate that same convivial atmosphere and sense of place that I was familiar with. Thus, the town of Kindred was born. A lovely little city nestled next to Catawba Creek with giant cliffs and part of the original ‘Big Woods’ nearby. That’s the marvelous thing about writing fiction—you can create your own Brigadoon.”

Childs also said, “The other thing I love about Scorched Eggs is that all my characters are independent women who are just a hair past the age of forty. They’re smart, caring, not easily intimidated, and have beaucoup life experiences that can be brought into play.”

“Scorched Eggs” begins when a fire engulfs the downtown area in Kindred and a friend is killed in the fire. When the fire appears to have been deliberately set, Suzanne and her friends wonder if it could have been a vengeful husband, an ex-fireman, or an expert in explosives. As the ladies track down the killer, they also balance their lives, their business, and provide recipes for goodies like Sour Cream Coffee Cake, Cheese Popovers, and Scorched Eggs.

Childs has been writing for thirty-five years. In addition to novels, her writing background includes television, radio, and screenplays. “I take this job very seriously,” she said. “It’s not a calling from on high or a wild creative romp. I don’t write only when the muse whispers in my ear. Rather, I sit down every morning at nine o’clock and work until six, trying to figure out what will entertain my readers—what will touch their hearts and transport them to an exciting new place they haven’t been before.”

One of the things Childs loves about her job is the ability to research bizarre subjects. When asked what the craziest thing she ever discovered while researching, she said, “Oh, my gosh, there are a million different things. I researched Blackbeard’s skull and discovered that it was actually melded with silver and made into a drinking tankard. I found out a lot about the lost treasure of the pirate Jean Lafitte. And then there’s the usual research into tasers, poisons, bang sticks, daggers, and crossbows. There are just so many delicious ways to kill a person!”

With extremely high levels of competition in the mystery genre, Childs realizes she must stand out to remain standing in the battle to sell books. She said, “Everyone has only so much free time, so I want my books to give them a whopping good ride.”

Learn more about Laura Childs on her website at www.laurachilds.com.

Congratulations to all of the January winners in the Book & a Latte contest: