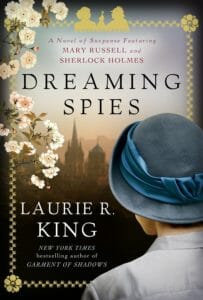 Sherlock Holmes is hot today. From TV and movies to novels and short stories, the famous sleuth remains ever-popular with readers and writers. Historical-fiction novelist Laurie R. King also caught the bug to write about the famous detective, but chose a different path. In this interview, the Edgar-winning author talks about her latest novel, “Dreaming Spies.”

The path chosen by King was not to write the typical Sherlock Holmes detective story, but to place Holmes in the position of companion detective as he works with his wife, Mary Russell. Fans of the series know that Mary met Sherlock Holmes when she was fifteen and became his student. Now, many years later, their relationship has matured into sleuthing peers who are also husband-and-wife.

“This is one novel that came out of my desire to go to a place, rather than my experiences with having gone there,” King said. “A couple of books ago, I planted a mention that the characters had stopped off in Japan to do a job for the Emperor—even though the then-Emperor was in no condition to be hiring stray detectives. That led me to Prince Regent Hirohito, Emperor in all but name.” King added that she wanted also to tie that clue in the 1924 adventure into the series timeline.


As a result of her urge to travel, “Dreaming Spies,” which takes place in 1925, is set in both Japan and Oxford. In addition to enjoying the use of fascinating settings, King also likes to play with issues in her stories. She described how those two interests have worked together to create a bestselling series.

“Because I love books with substance, and particularly because I’m a recovering academic, I like to set the adventures in a time and place that also lets me play with wider issues. ‘The Game’’ takes place in northern India where, a century later, the US is bogged down in the same war fought by the British Raj. ‘O Jerusalem’ looks at the decisions made by the British in Palestine, with results that we see on modern headlines. The ‘issues’ in ‘Dreaming Spies’ are less specific, but they are there, and center around the eternal questions of power and responsibilities.”

This self-proclaimed “recovering academic” enjoys writing the Mary Russell series for another reason. “Historical fiction holds up a fun-house mirror before the modern reader: we’re looking at ourselves, but with a twist—one that can reveal unsuspected truths. Yes, I write what Graham Greene called entertainments: my goal is a rousing good read, preferably in a colorful part of the world, often a suspense tale with my series characters, Mary Russell and her partner/husband, Sherlock Holmes.”

King isn’t completely immersed in the early 1900s, however. She has an unusual interest in toilets. She said, “I went to Japan with two friends who run a bookstore and a small press. Barbara Peters from Poisoned Pen and I just fell in love with the stunning variety, attention, and individuality found in Japanese toilets and restrooms. So much so that she and I ended up writing an illustrated toilet-based travelogue, ‘Not in Kansas Any More, TOTO’.”

In addition to an Edgar, King also has an honorary doctorate in Theology. It should come as no surprise that a writer of King’s caliber puts that to use also. “A number of my books contain religious ideas and institutions. Since murder—fictional or not—is driven by passion—and is there anything more passionately fought over than religious beliefs? Too, my academic background is in Old Testament, which is not only all about stories, but stories where small phrases or omissions can be as weighty as the clues in a mystery novel.”

King says it’s amazing how often the characters in her books share her interests. Extraordinary coincidences? Or well planned? Only King knows for sure, but her fans certainly relish the overlap. They also send her mail that reflects how closely the identify her with her characters.

Readers find it easy to confuse author and character,” King said. “When I wrote a novel with the injured protagonist suffering from headaches, I got a lot of sympathy letters about the migraines I clearly had. And I often have people say they’re surprised that I don’t have an English accent. So let me say straight out: I am not Mary Russell. She’s a whole lot brighter and infinitely more competent.”

To learn more about Laurie R. King, visit her website at laurierking.com.

What: This month, Laurie is giving away two hardcover copies of “Dreaming Spies” and I’m adding two $5.00 Starbucks gift cards. Two random entries will be chosen as winners. Each winner will receive a book and a gift card.

Verification of entries: All winning entries are subject to verification. Winners must claim prizes with 5 days.