You are here: Home / Archives for Your Money 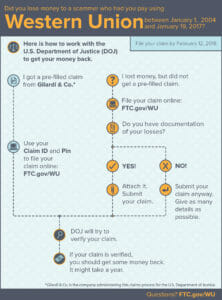 Western Union remission. It sounds like a disease. Or a scam. In fact, it’s neither. The Western Union remission process allows victims who sent money to a scammer via Western Union to file for a refund. Victims shouldn’t get overly excited though. This is a settlement between the Department of Justice (DOJ) and Western Union, not a case of a company developing a guilty conscience because they aided and abetted wire fraud. Here are a few things you need to know about the process.

Business is all about profits. Western Union made a ton of money off of people scammers instructed to wire money to help stranded relatives, make purchases, pay tax penalties, etc. On the flip side, government regulations and agencies such as the DOJ try to keep businesses from profiting unfairly. For years, Western Union profited while consumers lost.

With all that said, consumers need to realize that in all likelihood they will not get back everything they lost. There is a settlement pool of $586 million from which victims will be paid. Victims will receive compensation based on how many consumers file claims and the amounts of those claims.

The fine print in the deal

Aiding and abetting wire fraud are serious charges. That’s why the DOJ, the Federal Trade Commission, and the US Postal Inspection Service became involved. It’s also the reason Western Union probably agreed to the settlement. It was cheaper for them to cop to a deal than it was to fight in court. With that said, there are limitations to the Western Union remission.

Why the Western Union remission settlement came about

In the United States and Canada, authorities arrested thirty-nine agents for mail fraud, wire fraud, and money laundering. That number more than triples in other countries. A few agents were directly involved in scams, yet Western Union did nothing to stop them. 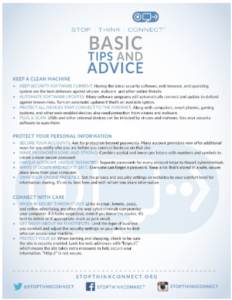 Here are three tips to help keep you and your information secure.

When in doubt, throw it out

Unsolicited emails can be a security nightmare. So can outdated websites. If you have any doubt about the trustworthiness of an email, a link, or a website, trash it or don’t go there. The risk is far too great to be taking chances.

Get savvy about wi-fi hotspots

I’ve used a virtual private server to protect my transmissions away from home for more than a year now. This means when I’m using a wi-fi connection I don’t control, the transmissions are encrypted. The virtual private server costs me a few dollars each month, but I feel it’s worth the price. But just because what I do is encrypted, I don’t stop there. Even with this layer of protection, I limit the types of transactions I conduct when not at home.

Any website where you conduct a financial transaction or enter financial information should be security enabled. This means the web page URL will begin with “https://”. If the URL does not have this designation, or your browser doesn’t identify it as security enabled, do not conduct financial business on the site. 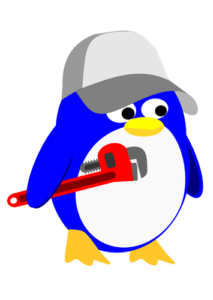 Trust me. This is not a scam tip. But, if you own an older home and have jobs piling up, this story might help you avoid spending more than you need for service. The great garbage disposal caper began on Memorial Day weekend. The first sign of a problem was when instead of merrily grinding away when the switch was flipped, the garbage disposal simply hummed. Not a problem. I’ve freed up a sticky disposal before.

Step 1: Find the allen wrench that came with the garbage disposal. Fortunately, it was right below the sink.

Step 3: Start shopping for a new disposal because the bearings on the old one froze up. Luckily, I found exactly what I wanted on sale at Lowe’s.

Step 4: Take the easy way out and have Lowe’s do the installation. After all, $99 seems like a really good price.

The garbage disposal you bought won’t fit. You need the same kind you had before. Oh yeah, the cheap one…

Step 6: Go back to Lowe’s when the installer, who looks like he’s a heavy smoker and acts like he’s 80, shows up and basically says, “The garbage disposal you bought won’t fit. You need the same kind you had before.” Oh, yeah, the cheap one with the one-year warranty and the four-year lifespan. The same kind the home warranty company installed. No thanks. I want something that will last and is quiet. Unfortunately, I can’t make it to the store until Sunday. The installation coordinator is not in until Monday. Wait another day.

Step 7: Get ready to do battle with Lowe’s over a refund on the installation charge. To my surprise, they beat me to the punch and call, telling me they just need an email address to send my refund receipt. (And, yes, since only they could have known all the details—which they provided, not me—I gave them the address.)

Step 8: Call a local plumber with good references on Yelp. Get a price. We’re having a couple of other small jobs done at the same time, so the estimate is more than $500, which includes $175 for the disposal. I’m okay with the price due to the three other “jobs” he’ll be doing. Call and leave a message we want to schedule. Wait for him to call me back. One day. Two.

Step 9: Try a different plumber. This one’s going to charge by the hour: $105 per hour to be exact. Still, doing the math, it looks like the per hour rate might save money. Maybe.

Step 10: Hourly Rate Guy shows up. Does the smaller jobs first. Those take fifteen minutes. Garbage disposal takes about two hours because he has to reroute pipes and much more. The job is a major pain for him, but we’re only out $260 and we’ve gotten everything done for about half the estimate of the first real plumber’s quote.

The main takeaway from this was a surprise to me. I’d normally prefer a price for the full job rather than an hourly rate. However, the price for four jobs included many intangibles. Because I had multiple things for the plumber, it was much cheaper to go the hourly rate. If we’d have had a single task for this guy, the per job price might have been the better deal, but with four jobs, hourly was much less expensive.

Brain training apps — can they really help improve memory? Problem solving? Forestall dementia? Not according to the Federal Trade Commission (FTC). On January 4, Lumo Labs, makers of the popular Lumosity app, agreed to modify its marketing tactics to no long make such grandiose claims.

If you’ve ever seen or heard a Lumosity ad, you’ll recall they claim those who play the games improve their cognition, problem solving, and more. In general, the brain training apps claim people can improve their mental health by simply playing a game.

In their announcement of the settlement, the FTC said, “…the defendants claimed training with Lumosity would 1) improve performance on everyday tasks, in school, at work, and in athletics; 2) delay age-related cognitive decline and protect against mild cognitive impairment, dementia, and Alzheimer’s disease; and 3) reduce cognitive impairment associated with health conditions, including stroke, traumatic brain injury, PTSD, ADHD, the side effects of chemotherapy, and Turner syndrome, and that scientific studies proved these benefits.”

Those allegations resulted in a $2 million settlement and an agreement to no longer make claims that cannot be substantiated by science. So, what happened?

…consider testing the free version before shelling out money for a monthly or annual subscription.

Here’s the closest thing I could find to a disclaimer on Lumosity.com as of January 9, 2016. These statements refer to “a randomized study on Lumosity, using crossword puzzles as an active control.”

“Our scientists had 4,715 participants complete the study. Half trained with Lumosity, while the rest did online crossword puzzles to control for placebo effects. After 10 weeks, the Lumosity group improved more than the crosswords group on an aggregate assessment of cognition. These results are promising, but we need to do more research to determine the connection between improved assessment scores and everyday tasks in participants’ lives. That’s our next focus.”

What to do about brain training apps

Turning a disclosure into a statement of promising results is sheer marketing genius. The problem is, for someone worried about cognitive decline, these statements may offer misleading results. In a poll conducted on SiteJabber.com, 113 of 161 reviewers gave the program only one or two stars. For those wanting to try out brain training apps, consider testing the free version before shelling out money for a monthly or annual subscription. If you decide the program doesn’t work for you, you’re only out time, not hard-earned dollars.