You are here: Home / Reviews / Review of The Fever Cabinet by Frankie Bow
Spread the love 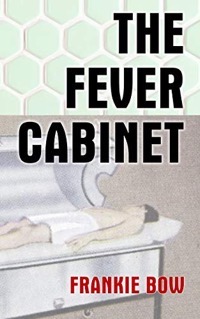 All Professor Molly wanted to do was teach literature. Instead she’s been named department chair. She’s buried in Student Retention paperwork. She has to mentor the department’s new star, the prickly Fiona Spencer. The college has just relocated to a former asylum, and the air conditioning is broken. At least nothing else can go wrong.Until Fiona finds a body in her office.

My review of The Fever Cabinet

Let’s get right to the point—I thoroughly enjoyed The Fever Cabinet. To begin with, I found Professor Molly’s predicament fascinating—she’s a tenured professor, head of her department, yet is hamstrung by the bureaucracy and a limited budget. It’s a side of academics most of us never think about.

The characters came across as quirky, but realistic. Despite her snobbish attitude, Fiona, the second POV character in the story, was surprisingly enjoyable to follow. Perhaps it was the fact that she, like Professor Molly, was caught in a difficult situation—living in a place she doesn’t like, tolerating a boss she finds intrusive, and slowly learning she’s married to a philandering husband she really doesn’t know. All in all, it’s a very complex set of relationships that set the stage for a well-written story.

I would have liked to have seen Professor Molly do a bit more sleuthing earlier in the story. However, once she was on the trail, the hunt was on to reveal an unexpected killer. The dialogue was also fun. There was just enough of the Hawaiian islands’ pidgin sprinkled throughout. There wasn’t a lot, but it was enough to give the feel of the islands without burdening the reader with the need to translate what is basically a foreign language. It was a nice touch that added character to a delightful read.