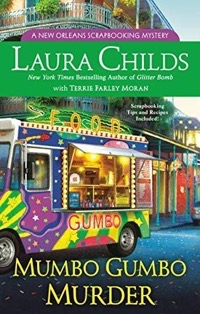 From the publisher of Mumbo Gumbo Murder

It’s Jazz Fest in New Orleans, and the giant puppets from the Beastmaster Puppet Theatre are parading through the French Quarter. Some are very spooky and veiled, others are tall and gangly, like strange aliens.

As the parade proceeds, Carmela Bertrand and her best friend, Ava, follow behind, down Royal Street and past the food booths. Suddenly, they hear a terrible crash from Devon Dowling’s antiques shop. They rush inside to find Devon collapsed with blood streaming down the side of his face. Has he been shot? Stabbed? 911 is hastily called, and the police and EMTs show up. After the police examine Devon’s body, they tell Carmela and Ava that their friend was murdered with an icepick. They’re shocked beyond belief—and now Mimi, Devon’s little pug, is left homeless.

Carmela and Ava are determined to catch the murderer, but the list of suspects is long. How long do they have before they find themselves on the killer’s list?

Mumbo Gumbo Murder is classic Laura Childs. Lots of food, antics, and fun. This cozy is filled with plenty of atmosphere from New Orleans and the Jazz Festival. The descriptions are lively and the setting takes on a life of its own. The best news is the mystery part of the story remains a puzzler to the end. Fans of the Scrapbooking Mysteries will love to lose themselves in the chase as Carmela and Ava go on their quest to find the killer despite the stern cautions from Carmela’s hot detective boyfriend Edgar who, of course, warns her to steer clear of his murder investigation or face his wrath.