You are here: Home / Reviews / Flashback Tuesday – a review of Red Flags by Tammy Kaehler
Spread the love 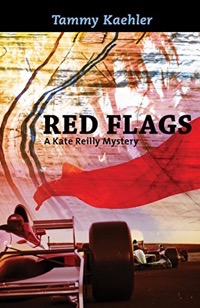 This is Book 4 in the Kate Reilly Mystery series. I recently started reading Red Flags and realized I’d made a terrible mistake—by not reading this series when it came out. Red Flags was published in 2016, so it’s an older book,and not something I normally review here. However, because I’d done a behind the story interview with the author in 2016, and I was so impressed by the book, I wanted to make an exception.

When Kate Reilly arrives in Long Beach, California, a week ahead of the Grand Prix, she’s immediately plunged into a new social scene – as well as a murder investigation. Her cousin Billy is found dead, with Kate’s card in his pocket. The cops want to know why, and sponsors and race organizers – anxious to keep racing’s image clean – want Kate to investigate. Doubting she can solve another murder, especially that of a relative she despised, Kate reluctantly agrees.

At the same time, coaching an actress for a celebrity race brings Kate into the orbit of Hollywood’s hottest bachelor. And then a local FBI agent takes notice of more than her driving and sleuthing skills. She goes from Sony Studios to Venice Beach and from Rodeo Drive to the Hollywood Hills, attending parties, power-shopping, and dodging unwelcome paparazzi.

Kate’s professional dreams are coming true. The upcoming Grand Prix is her first race with a new sponsor that’s also funding an IndyCar test drive and a ride in next year’s Indy 500 – along with future possibilities in NASCAR. The downside? New sponsor Frame Savings is owned by her family, and its management, except her long-estranged father, is unfriendly to her…even rivalrous.

On track, red flags fly to warn her of danger. Off track, Kate struggles to interpret warning signs and stay out of a killer’s grasp.

My review of Red Flags

Even though this was the fourth book in the series, I didn’t feel lost, but was able to catch up quickly. In a sense, it was like meeting someone in life and feeling as though you understood them even though you didn’t know all the details of their life.

Kate has a lot going on in her life in this book, but despite challenges, she is not an angst-filled, uncertain protagonist who dithers over her personal problems. Instead, she’s a confident, smart woman who stays focused on her career and personal goals. This persona makes her a joy to be around and also serves the strong pacing.

The writing in Red Flags is smart, crisp, and dynamic. The racing theme and setting are well done and, for the most part, explained in an understandable manner that doesn’t slow the pace of the story. I say ‘for the most part’ because every once in a while there was an acronym that threw me. This was only a minor speed bump in a story that had an excellent storyline, strong writing, and a protagonist that captures your heart.