You are here: Home / Author Interviews / Women, racing, and Red Flags — behind the story
Spread the love 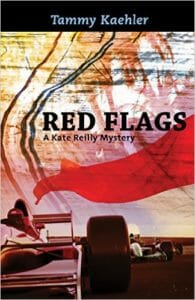 Tammy Kaehler writes the award-winning Kate Reilly Racing Mystery Series. We’re talking about racing cars, not horses. And women racing cars. It’s a world Kaehler discovered during a stint in corporate marketing. She was hooked by the contrast between the top-dollar, high-drama competition and friendly, family atmosphere. In Red Flags, her fourth book in the series, Kaehler upped the stakes for her protagonist and brought the series closer to home.

“I wanted to set Red Flags at my home race, the Grand Prix of Long Beach. I’d written three books in the series—each set at a different racetrack and race. I’d been waiting for the right time in Kate’s career and the right story before setting one in my backyard.”

According to Kaehler, Red Flags serves as a transition for Kate, moving from one kind of car and racing to another, and at the same time, moving up a step on the career ladder, which involves more visibility, more funding, and more opportunity. She said, “The Long Beach race weekend is perfect for the transition, because both kinds of cars and series race here.”

Kaehler’s protagonist is an anomaly in the racing world, a young woman. “She regularly rides the edge between control and chaos, between speed and death. And that’s just her day job,” Kaehler said. Mystery fans and racing insiders alike have praised the series because it takes readers behind the wheel. It’s the kind of experience writers can only convey by doing intensive research.

The reactions, comments, and grief she gets are common to women across industries…

“My research often looks a lot like me sitting on the couch in front of four hours of Sunday afternoon television, to my husband’s annoyance. Or it looks like me flying off to attend races around the country. But, I also attended racing school to be sure I got the ‘inside the helmet’ perspective correct. It was both the most terrifying and the coolest thing I’ve ever done.”

“I wasn’t very good at driving a race car—I’m too much of a chicken. But, everyone in the school looked slow compared to the professional NASCAR drivers who were also enrolled. No joke. Talk about intimidating!”

With each book, Kaehler said she’s making an argument for women in the racing world—where female drivers are still an unusual sight in the top ranks. “With Red Flags in particular, I wanted to address the pressures women in competitive arenas face—Kate’s a professional athlete, but I know the reactions, comments, and grief she gets are common to women across industries. She has to be focused, driven, and goal-oriented—but she can’t be too ‘aggressive,’ because then she won’t be liked.”

In the racing world, “not being liked” can translate into a loss of sponsorship dollars and media attention. Thus, Kaehler balances three stereotypes—being “too girly,” too feminist, and not doing enough for the female gender. “It’s a fine—and ever shifting—line she walks. And I have to be clear: Kate’s fictional; the position she’s put in is not. Unfortunately for Kate and real-life female drivers, I don’t have a solution, except to allow her to be the woman she is and expose the contradiction women sometimes have to live up to in our society.”

As a female author writing about a woman working in a traditionally male-dominated profession, Kaehler herself walks a fine line. “All of my trumpeting of women’s roles aside, this isn’t only a book for women. It’s not a series only for race fans. I’m writing the kind of books I love to read: stories about a smart, talented woman in an interesting field. You don’t have to know anything about auto racing to enjoy Kate’s adventures—any more than you need to know about steeplechase racing to enjoy Dick Francis.”

Learn more about Tammy Kaehler on her website at www.tammykaehler.com.