You are here: Home / Reviews / Review of No More Time
Spread the love 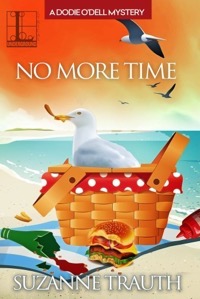 From the publisher of No More Time

Restaurant manager Dodie O’Dell has found her niche in the cozy New Jersey town of Etonville, creating menus that make a delicious double-act with the community theater’s productions. Now she’s ready for a vacation at the Jersey Shore town she called home before a hurricane hit. Sun, salty air, and seagulls make for a nostalgic escape from regular life—until a contingent from Etonville arrives to compete in a Jersey Shore theater festival.

Roped into helping her former boss cater the event, Dodie also gets a visit from her old flame, Jackson, who’s hoping to revive his charter boat business and is looking for a place to crash. Before Dodie can tell him that ship has sailed, Jackson’s partner is found murdered on his boat. Dodie knows her ex is a mooch, but she’s sure he’s no killer. But as she follows a trail of evidence that leads into her own past, Dodie stumbles on a dangerous conspiracy theory that could bring the festival to a shocking finale…

My review of No More Time

This was my first Dodie O’Dell Mystery. No More Time follows the currently popular formula of ‘single-woman-cop-boyfriend.’ There is a twist, however, in that the cop, Dodie’s fiancé Bill, is not in his home territory and therefore is not constantly blocking her from the investigation. In fact, he’s got a plot line of his own going on that largely keeps him out of the picture.

The writing style is crisp and there’s not a lot of unnecessary backstory, which means the plot keeps moving. There were also enough questions raised to make it difficult to figure out who the ultimate villain really was. Speaking of villains, there were plenty of suspects that were interesting enough to raise the ‘what-if’ question about them.

I found the characters enjoyable and easy to be around. For me, liking the main characters is a big deal because we spend a lot of time together. I thoroughly enjoyed Dodie and her friends, especially the somewhat eccentric Etonville Theater group.