You are here: Home / Reviews / Review of Prussian Counterpoint
Spread the love 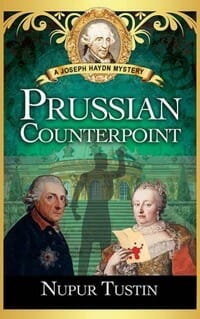 From the publisher of Prussian Counterpoint

An unexpected invitation from wily King Frederick causes composer Joseph Haydn to fear he’s walking into a trap. After all, the Prussian King has never had any use for Haydn’s music. His Majesty seems more intrigued at Haydn’s being the son of a market-judge.Worse still, the invitation appears to stir up suspicion in the highest quarters in Vienna. So much so that a mysterious, cloaked lady visits Haydn’s Music Room and issues a thinly veiled threat.

Now Haydn is convinced there’s mischief afoot. But not even he can foresee that he will stumble upon the corpse of the imperial ambassador a day after his arrival in Frederick’s Prussia, along with evidence that His Lordship may have been a common thief.

Can Haydn salvage the imperial ambassador’s reputation—and find his killer?

The author’s love of classical music and this era comes through clearly in Prussian Counterpoint. The entire book has an authentic feel—from the dialogue to the descriptions to the actions of the characters. The plot centers around the political intrigue surrounding Prussia, and the author portrays the uncertainty of the times well. At times, the mystery felt as though it took a back seat to the introduction of characters and the intrigue.

In a macro sense, the story is historically accurate. While the actual events portrayed in the story never took place, the overall situation involving Persia is accurate and the politics portrayed are also accurate. Accuracy is the both the strength and weakness of this story. The main point where this becomes obvious is in the references to characters in the narrative. For instance, in dialogue, it makes perfect sense for characters to use a noble’s title. However, in the narrative, the same titles quickly become cumbersome and confusing when several they are used in close proximity.

I enjoyed the story itself, but sometimes found myself bogged down in those pesky titles. I also enjoyed the fact that it basically took a team to bring together all the clues so Haydn could solve the crime.