You are here: Home / Author Interviews / Behind the story of The Spirit in Question by Cynthia Kuhn
Spread the love 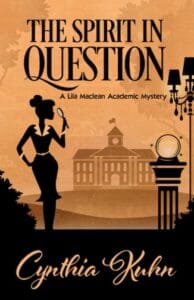 Cynthia Kuhn’s work has appeared in McSweeney’s Quarterly Concern, Literary Mama, Copper Nickel, Prick of the Spindle, Mama PhD and other publications. She teaches English at Metropolitan State University of Denver and serves as president of Sisters in Crime-Colorado. The Spirit in Question is Cynthia’s third  Lila Maclean academic mystery.

At the heart of The Spirit in Question

Cynthia said that although the Lila books are “academic” mysteries and do explore serious issues, she is committed to a light/humorous tone because those are the kinds of books she love to read. In preparation for writing The Spirit in Question, she took her family on the “spirit tour” at the Stanley Hotel, which introduces guests to the spirit folklore of the hotel. “It was both unsettling and terrific,” she said.

“In this book, I’m wrestling a bit with issues related to interpretation—how we make sense of things, especially when they aren’t easy to understand or to reconcile with what we know,” Cynthia said. “A character named Tolliver Ingersoll was cut out of the first two Lila books, and I was fond of him, so I decided to make the third book revolve around him. Since he is a playwright, the play became the central focus of the plot.”

Cynthia said that maintaining the balance of working and writing can be challenging, so she and her writing friends came up with a novel way to keep pushing forward. “When I was writing the very first draft of this, some other friends were drafting their books too, so we decided to do writing sprints every day…at the end of which we awarded each other cookie emoticons via text. It was surprisingly motivational to receive your cookie emoticon!”

Visit Cynthia Kuhn on the web at cynthiakuhn.net.