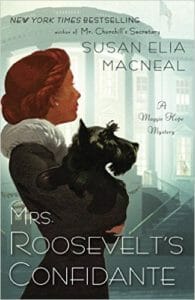 Susan Elia MacNeal is the author of The New York Times and USA Today-bestselling Maggie Hope mysteries. Her first book in the series, Mr. Churchill’s Secretary, was nominated for an Edgar and won the 2013 Barry Award for Best Paperback Original. In this interview, MacNeal discusses her latest book in the Maggie Hope mysteries, Mrs. Roosevelt’s Confidante, and what drove her to bring her protagonist, Maggie Hope, back to her native US.

“Winston Churchill, of course, went to Washington, D.C. after the attack on Pearl Harbor to meet with President Roosevelt,” said MacNeal. “I thought—what a great opportunity to get Maggie Hope back to the U.S.! We finally get to meet Aunt Edith, as well as see Brits David Greene and John Sterling as fish out of water for a change—which was fun. And Eleanor Roosevelt is one of my personal heroes, so it was an honor and a privilege to learn more about her. And of course, Maggie Hope would have admired her as well and jumped at the chance to work with her.

“In terms of the mystery, I was fascinated that FDR had secretly allowed telephone tapping and other security measures that violated privacy. We as a country just went through the same thing with the revelations of Edward Snowden and the NSA. Everything old is new again when it comes to the debate of national security vs. individual privacy. And I thought it would be fun to add that element to the book.”

Many of us think of ‘civil rights’ as something from the 1960s, but really, it began as soon as the Civil War ended.

MacNeal, who says her primary goal is to always tell a good story, saw an opportunity to tell another story within the book. She said, “I wanted to address the issue of segregation in the U.S. in 1941. I do that with Maggie Hope and Eleanor Roosevelt’s involvement in trying to stop the execution of Wendell Cotton, a young Black sharecropper. I was moved to write about it by the actual trial of Odell Waller and the involvement of NAACP activist Pauli Murray, who really did try to get Mrs. Roosevelt to use her influence to save a man’s life.

“Many of us think of ‘civil rights’ as something from the 1960s, but really, it began as soon as the Civil War ended. Great strides were being made in the 1930s and up until Pearl Harbor. President Roosevelt had an opportunity to integrate the military going into World War II—and chose not to. The fight for civil rights was shelved until after the war was won, causing real setbacks.”

Along with her interest in history and civil rights, MacNeal’s travels around the world have helped the Maggie Hope mysteries. She’s visited Japan, South Africa, Nigeria, Palestine, and Pakistan. In part, those trips were possible because her husband Noel MacNeal is a puppeteer who worked for Sesame Street, the Muppets, and Disney’s Bear in the Big blue House. When husband Noel went on those long business trips, MacNeal—and, of course, Maggie—tagged along.

MacNeal said she lives in Park Slope, Brooklyn, and is surrounded by writers and other artists. She describes where she lives as an “amazing experience.” She’s also quite a Bills and Sabres fan.

Of course, darling—have your people call my people.

One of MacNeal’s resources for information about the World War II era was her mother-in-law. In social media, she often referred to something “Miss Edna” had told her and described one of those conversations. “Before I started writing Mrs. Roosevelt’s Confidante, my mother-in-law, Edna MacNeal, moved in with us due to declining mobility. I loved having her around, and was able to ask her a lot of questions about her experiences during World War II and about segregation and civil rights. I remember sitting next to her on the sofa and asking her if she would mind helping with the book, and her reply was, ‘Of course, darling—have your people call my people.’

“Alas, she died before the book was finished. Writing through her last illnesses and death was one of the hardest things I’ve ever had to do. But I finished and dedicated the book to her—and I hope that maybe, somewhere, she’s proud.”