You are here: Home / Author Interviews / Story behind Hester Young’s The Gates of Evangeline
Spread the love 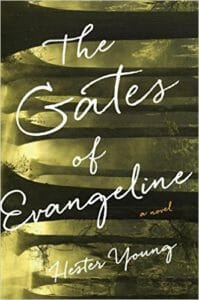 Hester Young began writing in the first grade. According to her bio, she covered topics as diverse as elephant death, divorce, selective mutism, and killer bells. In high school, she wrote a soap opera in which her friends had passionate affairs with Hollywood heartthrobs. Young has come a long way from those early days as a budding writer, as evidenced by her debut novel, “The Gates of Evangeline,” which was recently released by G.P. Putnam’s Sons.

According to Young, “This book was inspired by a pair of dreams. The first dream was one that I myself had of drifting through a Louisiana swamp in a rowboat. There was a little boy sitting across from me who told me the terrible story of his death. The images from that dream stayed with me for a long time, and eventually became the opening scene.”

Many writers are inspired by their dreams, however, in Hester Young’s case, the second dream wasn’t actually hers. “The second dream came from my grandmother. In 1956, she had recurring nightmares of her four-year-old son falling from a window. One day she left him with relatives and, tragically, her dream came true. Needless to say, his death was an unimaginable loss she carried with her throughout her life. My grandmother’s account of this dark premonition always stayed with me. When my dream collided in my head with hers, a novel was born.”

With dreams such a significant part of the inspiration behind the story, it makes sense that they play a central role in “The Gates of Evangeline.” Dreams, however, weren’t Young’s only inspiration.

“Without giving too much away,” Young said, “I’ll say that there is one scene in this book which involves the discovery of a very specific type of bone. I wrote this scene at 1 AM, and it gave me goosebumps. Hours later, I discovered an animal bone from that precise body part in my backyard. I have never found a bone before or after that, so it was a bit unsettling! I now keep the bone on my desk as a reminder that words are powerful things.”

I hate reading books that leave me emotionally wrecked—life is hard enough!

In her own reading, Young prefers books that pose questions over those offering definitive answers. She said, “‘The Gates of Evangeline’ asks readers to consider a number of questions, such as, ‘Is there more to our world than what we can perceive with our five senses? Are secrets inherently destructive? How does one seek meaning in life after a terrible loss?’ But mostly, it asks readers to embark upon an emotional journey with its heroine. This is entertainment, above all.”

Young also said she likes reading books that offer her a sense of hope. “I hate reading books that leave me emotionally wrecked—life is hard enough! So, although I am a mother writing about the loss of a child, the story is not a depressing one. I want my readers to walk away hopeful.”

A number of personal experiences in Young’s life have also influenced her writing. From her early days of writing a soap opera for her friends to her days at Tufts University and University College London, where she studied phonology, English syntax, and grammar, she’s learned that writing—and trying—are important to her life.

Hester Young even spent time at the University of Hawaii on Oahu, where she tried surfing. The emphasis, in this case, would definitely be on trying something new. It was an experience that, quite literally, scarred her.

“My surfing scars are purely physical,” Young said. “The first time I got lessons, I was surfing with some friends who were visiting from the mainland. I wiped out on some coral and scraped up my knee pretty badly, but I didn’t want to inconvenience my friends with the injury. I remember thinking, ‘Oh, my leg is gushing blood and that might draw sharks, so the polite thing is to discreetly limp out of the water and hope no one notices.’ Sadly, the wound later got infected. Despite this inauspicious beginning, I would happily surf—and undoubtedly wipe out—again.”