You are here: Home / Author Interviews / The good, the bad, and the uncertain with Jamie Lee Scott
Spread the love 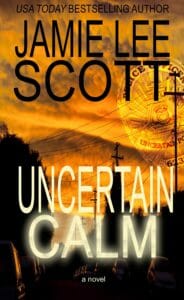 USA Today bestselling author Jamie Lee Scott likes to take life differently. A passionate mystery writer, Scott also enjoys screenplays and making indie films. And while her first screenplay, No One Knows, is an “Editor’s Choice” on DirecTV’s ShortsHD channel, she’s not in Hollywood “chasing the dream,” but  living on a farm with her husband, two dogs, two cats, and three horses. In this interview, the Uncertain series author describes how the series might just make readers see police differently.

“I started my writing career as a journalist,” said Scott. “But, I really had the urge to embellish, so I decided fiction was a better fit for me. I’ve been writing novels since 2009, and my first novel, ‘Let Us Prey,’ was published in 2011.”

“I set my first series, the Gotcha Detective Agency Mysteries, in my hometown [Salinas, CA], so I could go back there in my mind as much as possible. Even though I’ve been gone from Salinas for nineteen years, I’m still homesick. Writing that series has been great fun for me, even though the Salinas of today is vastly different from my memories.”

The Uncertain series is set in the small town of Uncertain. Scott said the town  got its name from her readers. “I wanted a fun name for my new town in the foothills of the Sierra Nevada mountains, and I offered my readers the chance to pick the name.”

The idea for the series came out of a police ride-along Scott did with officers of the Thibodaux, LA Police Department. Scott said, “I was lucky enough to ride on a 6 pm shift and tag along for about 10 hours. I was drawn in by the total lack of respect for authority as I watched the patient officers deal with the public, and the compassion with which the officers handled delicate situations.”

It was during that ride-along that Scott decided to write from a uniformed officer’s point of view, rather than that of the traditional homicide detective. “‘Uncertain Beginnings’ is the novella prequel to this series. It introduces Wyatt Burke and gives readers a glimpse into a small town police department. This novella shows the good, bad, and uncertain, of the thin blue line.”

“There are good and bad in every profession, but many times we don’t understand the bad. Uncertain plays with themes that show cops for who they are as people and what they deal with on a daily basis. Sometimes there are cops who should never have been given a job with a gun and a badge, and there are those who live by the creed ‘to protect and to serve,’ because they became a cop for that reason, and not the power they thought the badge would give them.”

In “Uncertain Calm,” police officer Harper Leigh returns to Uncertain, California after taking a year off to recover from an on-duty gunshot wound. During her first day back on patrol, Harper and her partner respond to a call that ends with a dead body on the sidewalk. Harper is determined to find the killer, but with a media storm raging, protesters in the streets, and another man killed during the protests, finding help in Uncertain is anything but easy.

[contestad code=#Uncertain startdate=2015-05-17 enddate=2015-05-24]Jamie Lee Scott is a self-published author by choice. She said she had the opportunity to go the traditional publishing route, but was given some facts by a fellow author, and decided self-publishing was a better fit. “Instead of signing with the traditional publisher,” she said, “I published my first novel on my own. And I never looked back.”

In keeping with her philosophy of doing things differently, Scott said she has an unusual way to develop her characters. “I pick a birth date for them at random, and then they get their character traits from the research I do in Linda Goodman’s ‘Sun Signs.’ It’s a quick and easy way to develop character personalities, otherwise I agonize over them, and worry that they’ll be the same as the last cast of characters.”

Just because Scott uses random birthdates to help define characters doesn’t mean characters don’t seem familiar to those she knows. She said, “My friend, who is a sergeant in Thibodaux, swears Wyatt Burke’s character [from the Uncertain series] is loosely based on him. I’ll never tell.”

Learn more about Jamie Lee Scott on her website at www.jamieleescott.com.