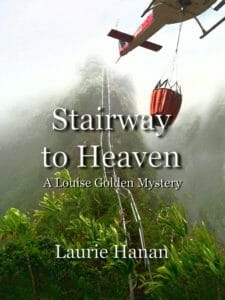 When is it okay to lie? That’s a question writer Laurie Hanan has contemplated since she was a child. For this interview, the author of the Louise Golden mystery series talked about that question and her latest release, “Stairway to Heaven.”

“Everyone knows we aren’t supposed to tell lies,” said Hanan. “Nobody likes a liar. I consider myself an honest, open, truthful person. But still there have been times I’ve had to rationalize lying, when it seemed telling a lie would do less harm than telling the truth.”

Hanan also said that there is an underlying theme of lies and deception in “Stairway to Heaven.” She added, “I touch on the question, ‘When is it okay to tell a lie, even to someone you love?’ I didn’t set out to work this theme into my book, but as I wrote the story I saw the main character [Louise Golden] grappling with the issue again and again. She is forced to choose between lying to someone she loves, or telling a truth and betraying a trust.”

[contestad code=Stairway startdate=2015-04-12 enddate=2015-04-19]In addition to her desire to explore the theme of deception, Hanan said she also weaves her passion for animals into her stories. “My love for animals can’t be boiled down to a single incident or event. It’s all in the way I live my life, the choices I make day by day, minute by minute. As a child I had all sorts of pets, and it was clear that animals are intelligent beings with complicated emotions. I couldn’t see them as less valuable than myself.”

Hanan grew up in the islands of the South Pacific. Her father pioneered air travel to many of the tiny islands and she often accompanied him on his flights. Those early days of traveling might have given her a yearning to see more of the world. Hanan went to the University of Washington in Seattle, lived in London, and even worked in the cotton fields of the Jezebel Valley to earn her keep. She met her husband in Israel and they toured the Far East. On one of those trips, Hanan’s passion for animals led the couple to a wild adventure.


“Traveling through Nepal was definitely memorable,” said Hanan. “We slept in a mud hut, made friends, ate, sang, and danced with the natives. But, the one experience that stands out more than any of the others is riding elephants through the Chitwan National Forest. I wanted to photograph wild rhinos, and the best way to do that is from the back of an elephant. We hired two locals to take us. Their elephants were not geared up for tourists with stairs and saddles, and we were on our own to figure out how to get up onto their backs.

“I was pulled from above and pushed from below by our two guides, with the warning that I’d better hurry up before the elephant got mad. My elephant driver sat in front of me with his legs around the elephant’s neck, the more comfortable seat to be sure, and guided it by tapping its head with a big stick. I sat behind him on the rounded, bony part of the elephant’s back. The only possible handhold was the waist of the nearly-naked young man in front of me.

“We found some rhinos, but they ran when we approached. Our elephants took off in pursuit, me clinging to the young man in front of me for dear life, thinking this may not have been one of my better ideas. But, I got some great shots of the rhinos, and I have some really . . . unusual . . . memories.”

In fact, stories that are unusual seem to hold a particular fascination for Hanan. “I don’t remember where I first heard about it, but over the years I’ve heard several variations of the story of a scuba diver being picked by a helicopter bucket and dumped into a forest fire. Some sources say the rumor started in France; others say it started in the US. But, all sources say it’s impossible.”

Hanan said the legend has been proven to be impossible by testing, but the topic came up during lunch with a writing group. She said, “It can’t happen, but I thought, ‘What if it did?’ Eventually, I decided to write a book based on the premise that the impossible really happened. Then the question is, ‘How?’”

In the fourth Louise Golden mystery, Hanan explores that question when firefighters discover a badly charred body on a steep mountain ridge, wearing swim fins and a diving mask. The body is identified as a man on Louise’s postal route and she wonders if a mysterious package she delivered to him could hold the key to his death. Louise learns what was in the package and why everyone wants it, but is sworn to secrecy. One deception leads to another as Louise hides the truth to protect the innocent, and the not-so-innocent.

In the Louise Golden mysteries, Hanan’s protagonist has two children, Jackie and Emmeline, who are about the same age as her own. In the book, Emmeline is now 17 and confronting challenges faced by teens. Hanan said, “The events in the book are purely fictional. But, with a 17-year-old daughter of my own it was emotional for me to write about Emmeline, who is so angry, so rebellious, and gets into some pretty serious trouble.” Again intrigued by a challenge, Hanan said she is now working on a novel written from Emmeline’s point of view.