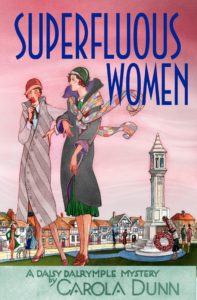 You can take the girl out of Britain, but you can’t take the Britain out of the girl. Or, so it might be said of Carola Dunn. In this interview, the author of more than fifty mysteries and regency romances discusses her upcoming novel “Superfluous Women” and the historical importance of the title.

The idea for the book came to Dunn when she discovered a book by Virginia Nicholson titled “Singled Out.” Dunn said, “In the first decade of this century, she [Nicholson] went looking for surviving women of the affected generation. She interviewed them about their experiences, their choices, their emotional lives, and she read the memoirs of some who had already died.”

“Superfluous Women illuminates a little-known result of the First World War,” said Dunn. “So many British men were killed in battle that hundreds of thousands of women found themselves extremely unlikely to become wives and mothers, as they had been brought up to expect. The press labelled them ‘Surplus’ or ‘Superfluous’ women, and even suggested they should be encouraged to emigrate to the [British] colonies to provide wives for male colonists.”


One of the things Dunn includes in this historical mystery are the various ways these superfluous women deal with this drastic change in their lives. According to Dunn, “It affected the expectations of later generations of women, too. For instance, one of my characters has qualified as a Chartered Accountant—the first woman to do so in England was in 1919. Her job and her skills play an important part in the story. She is not the sort to repine, but another of the three deeply regrets the unlikelihood that she will ever bear children.”

“Superfluous Women” is set in Beaconsfield, Bucks. Dunn said, “I grew up in a village a couple of miles away, and my brother still lives there, so researching the setting was easy.” Setting and history aside, “Superfluous Women” is a mystery set in 1920s England which begins with the classic mystery plot element of a body in a locked room.

Dunn said, “The Honourable Daisy Dalrymple Fletcher, on a convalescent trip to the countryside, goes to visit three old school friends in the area. The three, all unmarried, have recently bought a house together. They are a part of the generation of ‘superfluous women’ brought up expecting marriage and a family, but left without any prospects after more than 700,000 British men were killed in the Great War.”

In the book, Daisy and her husband, Detective Chief Inspector Alec Fletcher of Scotland Yard, go for a Sunday lunch with Daisy’s friends. One of the women mentions a wine cellar below their house, which remains curiously locked, no key to be found. Alec offers to pick the lock, but when he opens the door, what greets them is not a cache of wine, but the stench of a long-dead body.

“And with that,” Dunn said, “what was a pleasant Sunday lunch has taken an unexpected turn. Now, Daisy’s three friends are the most obvious suspects in a murder and her husband Alec is a witness and can’t officially take over the investigation. So, before the local detective, Inspector Underwood, can officially bring charges against her friends, Daisy is determined to use all her resources (Alec) and skills to solve the mystery behind this perplexing locked-room crime.”

After she had written fifteen Daisy Dalrymple mysteries, Dunn realized that while Daisy was still in her 20s, she herself had aged considerably. She started a new series, the Cornish mysteries, with a protagonist of her own age, Eleanor Trewynn.

Dunn said that she started writing mysteries because the two Regency publishers she was writing for at the time both stopped publishing Regencies within six months of each other. She said, “It gave me the incentive I needed to try something new. When I proposed the Daisy Dalrymple series, I titled them Death in January, Death in February, and so on, because I was tired of thinking up titles for my Regencies. Each murder was to have some connection to the named month.”

One thing Dunn hadn’t considered was the issue of longevity. Dunn is now thankful that the publisher was concerned about it. “The publisher who bought the first didn’t care for the idea—luckily, as I don’t know what I’d have done once I’d used up all the months.”

Writing isn’t Dunn’s only passion, however. “I’m a dog-person,” she said. “I enjoy walking, gardening, reading, classical music, chocolate, playing the recorder, and baking bread; I abominate housework. Whether murder or romance is my subject, all my books have a sense of humour. And I still use UK spelling.”

In addition to her mysteries, Carola Dunn has also written 32 Regencies, which are still available as ebooks. Learn more about Carola Dunn on her website at www.CarolaDunn.weebly.com.