You are here: Home / Archives for The Snitch

In The Snitch this month, my scam tip is a letter to Santa about Santa scams. (Click here to read The Snitch) Quite frankly, I’d never heard of Santa scams before, but when I did I was appalled. Here’s how it all started. Back in the 1950s, enterprising people who wanted to help spread Christmas cheer started businesses that charged a fee to mail a handwritten letter from Santa to a child. 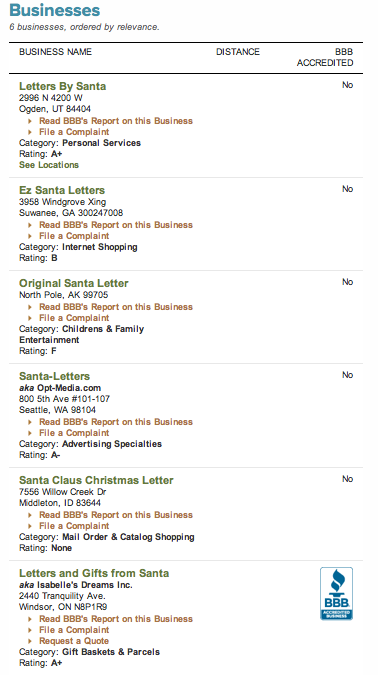 As I said in The Snitch, I don’t recall ever receiving this type of letter, but imagine it would be the highlight of any child’s Christmas. I did some research on the companies that provide this service and discovered seven listed on the Better Business Bureau website. Here’s the sad part. Look at the entry for “Original Santa Letter” with an address in, of all places, North Pole, AK. That’s an “F” rating. It doesn’t get much worse.

Did this company just have a couple of customers who had a bad experience, then didn’t resolve the complaints? They may simply be a victim of circumstance. When I searched for reviews or complaints about the company, everything was positive with the exception of that BBB.org listing.

What I do know is that there are people who set up fake websites to solicit “business” and then either never fulfill the order or use the gathered information to commit identity theft.

If you’re going to have a letter sent to a child for Christmas, be sure to take a few precautions.

Personally, I vote for putting coal in the stockings of the guys behind these scams. Have you ever had a Santa letter sent? Did you receive one?

Do you remember The Eagles? Don Henley and Glenn Frey were so good together. It must be 1976 all again because they’re back—and on tour. I can just hear them singing now…”There’s a new Snitch in town…” Oh wait, that was “new kid,” wasn’t’ it? Well, anyway, there is a new Snitch and it’s out today. And the Eagles really are back on tour.
This month “The Snitch” includes a “recap” scam tip about my visit to the Jungle Red Writers blog. Things began on the light side, then got progressively more serious as the comments during the day went on. People are very upset about scams and cons. Check out some of the high points in “The Snitch” this month.
There’s also a recipe for Baked Salmon with Maple & Mustard Glaze—really good, especially now that the days are cooling off. Or, how about the whopper of a Goodreads Giveaway that includes an iPad mini? Find all of that along with news about “Kauai Temptations” in the November edition of “The Snitch.”

Have you already seen this month’s edition? Leave a comment and let me know what you think. Thanks!