You are here: Home / Author Interviews / Behind the story of Murder Makes Scents
Spread the love 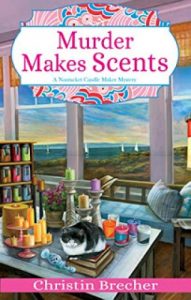 Christin Brecher spent many years working in marketing and publishing. While she was born and raised in New York City, she considers herself very much a small-town girl. Murder Makes Scents is her second book in the Nantucket Candle Maker Mystery series.

“When I was starting the book, I brought my computer to a small café on Nantucket,”Christin said. “I realized I was surrounded by people from all over the world who were speaking many different languages. As Stella herself points out during the story, it is amazing how international the tiny island has become. I liked the idea of how global intrigue might find its way to a small island, one which is mostly known today for its shingled houses and beautiful beaches.”

Christin added that Stella jumps out of a plane at the end of the book. “For me, the book couldn’t have existed without that crazy scene. I grew up having heard a story that the airport on Nantucket was built on the foggiest side of the island so that pilots could practice taking off and landing during World War II. The story stuck with me. I couldn’t imagine Stella jumping in to (or out of) a spy story without it.”

Low tech can be the best solution

“At the beginning of Murder Makes Scents, an international spy tells Stella that ‘in a high-tech world, sometimes old-fashioned methods are the most unexpected way to go.’ I like the idea that a low-tech solution—something as simple as a scented candle—could be a defensive measure in our complicated world. Stella is the perfect sleuth to execute such a challenge. She’s a small-town girl with guts and a talent for solving puzzles who stands up to dangerous criminals to protect international secrets and solve a murder. Stella leans in to family and friends and never falls apart, all while juggling a business, a high-maintenance mother, and a somewhat confusing love life. She’s a true hero!” 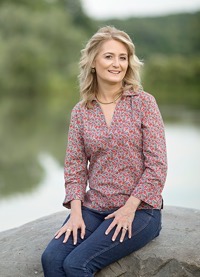 On the personal side

“What I love most about cozy mysteries is how unexpectedly radical they can be,” Christin said. “Especially those with female protagonists, of which there are many. The covers are charming, the titles have puns, and the sleuths are amateurs. Seems fairly safe, right? Not so. Once you delve into the pages, you meet women who use their everyday talents to make sure that justice is served. And they do so while maintaining relationships, jobs and their own sense of self. I love that a book with a cat and a craft can remind us that we can all make a difference if we are willing to step up. I find that uplifting.”

Christin wrote Murder Makes Scents as a cozy mystery wrapped in action-adventure theme. Nantucket is filled with gorgeous bogs, wetlands, marshes and coastal ponds, all of which can become very foggy at night.

“I loved the idea of Stella racing across its landscape, in search of answers and away from those who might thwart her quest. One of my favorite Stella moments in the book occurs right after she begins her mission to find a stolen formula that, if found, might put world peace at risk. She says, ‘… I pulled from my bag a leftover Gauloise cigarette from the pack my mom and I had used for effect at Parisian cafes. I stuck it in my mouth, and let it roll across my lips… I turned on my heels to my car. I felt dressed for a high-speed drive, but instead I had my small red Beetle, which I had to drive at a careful pace.’”

“I had a wonderful moment in writing the book when my father and I snuck on to a golf course at night, just as Stella does. While I looked across the grounds to get a sense of how Stella would feel and what she would see, a huge beam of light suddenly flashed at us from the Sankaty Head lighthouse. I’d had no idea that the light reached as far as the course until our site visit. Right then and there, I knew I had to incorporate this beacon into my story.

“My dad also accompanied me to the Nantucket Cranberry festival where I had more than my fair share of chocolate covered cranberries! Because I have a scene in the book at the festival, I decided to put a cranberry pie recipe at the end of the novel. After meeting many Nantucketers who are incredible bakers, I found a generations-old, well-loved, and delicious recipe to use. Over Christmas, the owner sent the original to me as a surprise. I’m not worthy!!”