You are here: Home / Author Interviews / Behind the story of Storm of Secrets by Loretta Marion
Spread the love 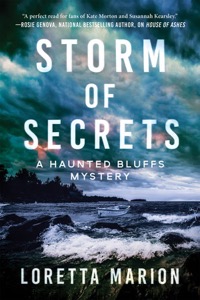 Loretta Marion‘s affection for the written word stared in childhood and has continued to this day, Her Haunted Bluffs Mystery Series is set on Cape Cod. Storm of Secrets is the second book in the series.

“I love Cape Cod and have been visiting for years,” Loretta said. “My escapes on the Cape have always been my most fertile writing times, so it made sense for me to set a book in a location that was both special and familiar to me.”

The first book in the series, House of Ashes, was inspired by a bicycle ride Loretta took with her husband on the Cape Cod trail. “I was struck with this idea of a couple going for a bike ride and never coming back but leaving all their personal items behind – including their dog. From that seed the idea of a mystery began to germinate.”

Loretta added that the story involved a small town which becomes somewhat of a character itself. “I began to create in my mind the fictional town of Whale Rock. I also like to write the evolution of female characters, though I can’t recall exactly how Cassandra Mitchell and her story of woe popped into my head. The Bluffs, the grand Victorian she inherited from her family, is haunted by the spirits of her great-grandparents who were the original owners of the home. They died in a tragic fire after suffering many great losses attributed to a century-old curse that continues to plague the Mitchell family. The inspiration for the house being haunted came from my own personal experiences.”

Loretta said, “Writers do a great deal of research, and in my explorations, I came upon a true unsolved mystery about the body of a young boy found in a box in the Pennsylvania woods. In the more than fifty years since the discovery of the body, the Boy in the Box case has never been solved and the boy has remained unidentified. I was so moved by this unclaimed boy’s story that I knew I needed to find a way to include it in some way in one of my books.”

Initially, the true story was part of the resolution to the first book. However, when the book was acquired by Loretta’s publisher, they decided change the ending. “There is a brief mention to Barnacle Boy in House of Ashes – inspired by the true story – the young child who washed up on the shores of Whale Rock decades earlier. In my mind, Barnacle Boy’s story was always going to be a significant part of the second book. When it came to writing that aspect of the book it was no longer appropriate to include the real-life account. I wrote a historical story that was inspired by it instead, only making a quiet reference to the true story in the book. This is interwoven into the present-day story that includes a mirrored reference with a child that goes missing during the chaos of a severe tropical storm. That is how the book evolved…without giving anything away! Readers will learn what happened to Barnacle Boy those many decades ago as well as the fate of the child who disappeared. Added into those interwoven mysteries is a suspicious death that points to murder.”

“I think what is most important for readers to understand about me is my motivation for writing,” Loretta said. “I do not write for fame or fortune, but for the simple desire of bringing readers the pleasure of an unexpected journey. That is what I most enjoy about reading, and if I can offer that same indulgence of escape in my writing, then I am deeply rewarded. I also write for personal enrichment. Creating with words is my greatest luxury. Sometimes I pinch myself, disbelieving I’m even permitted to do this.” 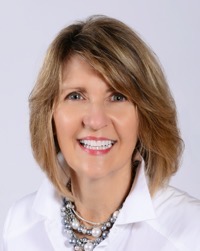 Loretta added that she did not have a life-long ambition to be an author. Her journey began later in her life and evolved from the unexpected world of Hospice.

“A few years following my breast cancer diagnosis and treatment, I decided to show my gratitude for a second chance by becoming a Hospice volunteer. It was through that meaningful and eye-opening experience that I discovered a buried desire to write a book, possibly to prove my relevance or to leave a legacy behind when I would be gone from this world. Regardless the reason, it was my brave hospice patients who inspired me to tiptoe into the uncertain world of publishing.”

“Not to get too philosophical,” Loretta said, “but there always seem to be these Jungian moments of “meaningful coincidences” that arise while I’m writing a book. I take them as little messages from the universe that I’m on the right track.”

Loretta feels fortunate that her editor is respectful in acknowledging that ultimately the ownership of the books is the author’s. “I have been equally respectful of her experience and wisdom and always remain open to her excellent suggestions, which help make the books even better. For example, it was hard to let go of the original ending of House of Ashes, however, I’m very pleased with how Storm of Secrets evolved, which never could have happened if I had kept the original conclusion to the first book. Challenges force us to find a way around them, and often the rewards are great when taken to an even better destination. (Okay, now I am pushing the philosophical envelope!)”

Learn more about Loretta at lorettamarion.com.