You are here: Home / Author Interviews / Behind the story of Silent Night, Deadly Night
Spread the love 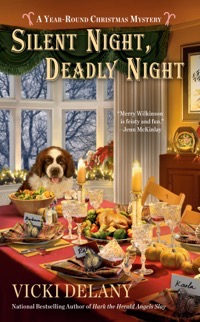 Vicki Delany has written more than thirty books and currently has four cozy mystery series: the Tea By The Sea mysteries, the Sherlock Holmes Bookshop series, the Year Round Christmas mysteries and, as Eva Gates, the Lighthouse Library series.

Silent Night, Deadly Night is the fourth book in the Year Round Christmas series. “It’s not intended to be at all serious or deep,” Vicki said. “It’s a fun romp through a silly little town that tries to brand itself as America’s Christmas Town. It’s about family and friends and community and loyalty. And what happens to those bonds when a murder is thrown into the mix. If there is a message to Silent Night Deadly Night, maybe it’s that our memories can be a lot rosier than our reality ever was.”

The first two books are set in the run up to Christmas, the third in July, and Vicki said she was looking for a non-Christmas setting for the fourth. “Thanksgiving seemed perfect. Thanksgiving means food, and I’m always looking for different ways to kill people, so murdering someone with food seemed like a good fit. I was tossing around some ideas with a couple of writer friends and one of them said something about a pot luck, where one dish appears on the table but no one knows who made it. And on it went from there…”

Vicki lives on a small property in the country. When she first moved there, she started a vegetable garden. “That turned out to be too much like hard work, so I now plant two pots with heirloom tomato seedlings on the deck. I love my writing life. I write every single day when I’m at home. I travel a lot and I’ve been to many marvelous places. Earlier this year I was in Mozambique and in the fall I’m going to Russia. I also travel just about anywhere in North America to book events and festivals etc., when I’m invited (hint hint).”

She is also the co-founder and co-organizer of Women Killing it, a crime writing festival in Picton, Ontario held every Labour Day weekend with the aim of promoting Canadian female crime writers. For more information about the festival, visit . womenkillingitauthorsfestival.wordpress.com. 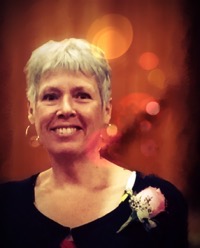 Vicki started her career writing standalone psychological suspense, aka domestic suspense. She also penned an eight-book police procedural series. She said, “I’m now writing cozies. That’s quite a switch. I found that after darker, grittier books, I settled easily into cozies. The darker side of life is important and it needs to be dealt with, but I’d had enough of that. To me, writing cozies is fun. I like to keep them light and I hope funny. If I’m having fun, I hope the reader is too. I’ve written thirty-five published books to date, and I’m still having fun. I wouldn’t do it if I wasn’t.”

An avid traveler, Vicki has enjoyed location research for her books. “I’d never even been to the Outer Banks before I had a contract for the Lighthouse Library series (written under the pen name of Eva Gates), so off I went to have a look around. Of course I had to try all the southern food: shrimp and grits, hush puppies., North Carolina barbeque. It’s a tough job but someone has to do it. For the Sherlock Holmes Bookshop series it was off to Cape Cod: chowder, clams, fish pulled straight from the sea. Yum.

“I didn’t need to do any location research for the Year Round Christmas series, because it’s set in Upstate New York, near Rochester which is an area I know well. I didn’t have to do much food research either, because I am very familiar with turkey and apple pie!”