You are here: Home / Author Interviews / Behind the story of The Time for Murder is Meow
Spread the love 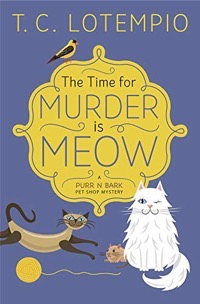 Toni LoTiempo has had a love of mysteries that began when she was introduced to her first Nancy Drew mystery at age ten. Her latest Pet Shop Mystery is The Time for Murder is Meow. Here’s the story behind that new mystery.

The beginnings of The Time for Murder is Meow

“The point I tried to make in this novel is that anyone, no matter how old, can have a second shot at life,” said Toni. “My protagonist, Shell, was an actress for most of her adult life and hated it. Now, in her late thirties, she finally gets a chance to do what she really wants to do, despite opposition from her agent, mother and co-star Gary. Stick to your guns and believe in yourself and you can accomplish anything!”

Toni said the idea for this book came from a friend of hers. “She wanted me to write a book that had a one-eyed Persian cat in it! (she was very specific!) Shell went through many occupations before an editor at another publishing house requested a mystery series about a pet shop. Just as I finished the book, the editor was let go!!!!! But then my agent managed to place it elsewhere.”

On the personal side

“I am an avid mystery reader and have been reading books since age three!” Toni said. “My mother was a big mystery lover, Perry Mason in particular, and I got my love of the genre from her.”

During the writing of a book, writers frequently face personal challenges that may find their way into the book. Toni said that while she was writing The Time for Murder is Meow, her sixteen-year-old cat, Gata, took ill and passed away. “It made some of the scenes where there is interaction between Shell and the cats pretty painful to write.” 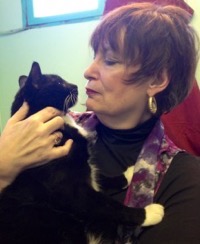 Not all author experiences are so dramatic, however. While researching material for one of Toni’s early novels, all of which were in the supernatural/horror genre, she and a friend had the opportunity to attend a horror convention. “My book was about zombies, so we dressed up as zombies ala Dawn of the Dead for a costime contest at the convention. When my friend called up for the tickets, they neglected to tell him that the costume contest had been cancelled. You should have seen the looks we got when we entered the auditorium LOL.”