You are here: Home / Author Interviews / Behind the story of Gore in the Garden
Spread the love 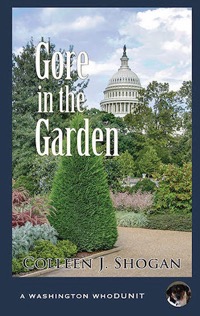 Colleen J. Shogan is a political scientist by training. She’s also been reading mysteries most of her life. Her first book won the Next Generation Indie Prize for Best Mystery and other have been RONE and Killer Nashville finalists in the mystery category.

“I’d always toyed with the idea of setting a book at the United States Botanic Garden but I wasn’t quite sure about the plot,” Colleen said. “One day, I visited during my lunch break. As I was walking along the path inside the main solarium, I saw the nameplate of a plant: Ficus Aurea. It’s also known as the ‘Strangler Fig.’ I knew I had to write my next book at the Botanic Garden; the plot had now almost written itself!”

Colleen also said that she’d visited the Botanic Garden on Capitol Hill for years. “That being said, I also always thought it was a slightly creepy place, with looming plants, eerie silence, and lots of inconspicuous nooks and crannies. I read a great deal about the famous, rare corpse flower and its bloom at the Botanic Garden. With a plant like the corpse flower, how couldn’t I set a mystery there?”

“The  Washington Whodunit series addresses the issue of trust in government,” Colleen said. “Public opinion approval ratings of Congress are quite low these days, with many Americans believing that Washington, D.C. is a place where politicians come to get rich and take advantage of the system. I provide a different perspective in my books. I don’t sugarcoat the reality of living and working inside our nation’s capital, but I also try to show there are well-intentioned, hardworking public servants on Capitol Hill. In other words, I write about the side of Washington that doesn’t garner much attention from political reporters or Twitter. There are layers behind every politician and reasons for why they behave the ways in which they do. In subtle ways that don’t ruin the mystery, I uncover those stories.”

Colleen has worked on Capitol Hill in a variety of different jobs for the past fourteen years. She knows the setting well and tries to describe it as accurately as possible. “My books provide some fun facts and historical education, as well as entertain with the mystery. My day job is at the Library of Congress and I am lucky enough to be in a position where I can experience a lot of what Capitol Hill and D.C. has to offer, such as exploring venues like the National Archives and the Smithsonian. These places often show up in my books, which provides more flavor and an insider treat for curious readers.” 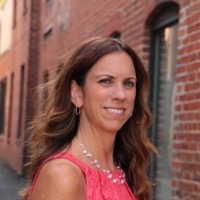 In the name of research…

“When I was writing the fourth book in my series, K Street Killing, I wanted to investigate a rooftop setting for a major scene. But the iconic rooftop I had in mind isn’t open to the general public. Instead, it’s reserved for special occasions, rentals, fundraisers, weddings, or other high-profile events. After my husband and I had dinner in the restaurant on the first floor, I told our waiter a small white lie, explaining that I might want to host a major event on the rooftop. We were quickly ushered to the roof, where I got to walk around and ask all the questions I wanted. Of course, it wasn’t for an actual event. Instead, it was for staging a fictitious murder!”