You are here: Home / Author Interviews / Behind the story of Death by Committee by Alexis Morgan
Spread the love 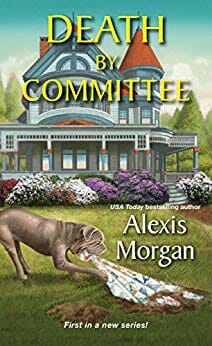 Alexis Morgan is a USA Today Best-selling author. She is the author of over forty-five novels, novellas, and short stories that span a variety of genres from American West historicals to paranormal and fantasy romances and contemporary romances. Death by Committee (An Abby McCree Mystery) is her first cozy mystery.

The beginnings of Death by Committee

“I started off with the idea of a character being forced out of her comfort zone in unexpected ways,” Alexis said. “My main character, Abby, not only inherits her aunt’s home, but also her dog, her tenant, and her friends. From the beginning, Abby is shocked to learn that her new friends expect her to assume all of her late aunt’s duties on the various committees that Sybil had served on.”

In the case of Death by Committee, not only is Abby caught up in dealing with high expectations, but her life becomes more complicated when she finds her late aunt’s arch rival buried in the backyard. Alexis said, “There are times when circumstances force people to reexamine their lives and redefine how they see themselves. It can be something as simple as graduating from school and leaving that part of their lives behind. Sometimes jobs and relationships end, leaving people with no choice but to move forward in a different direction.

“In Abby’s case, her prior job and marriage were closely intertwined. As a result of her divorce, she’s left to come to terms with her new life as a single woman living in a new town and trying decide how she wants her future to look. I love watching her come into her own as she makes new friends, builds strong connections in a new community, and then puts her life on the line to protect her aunt’s reputation and find justice for the murder victim.”

“My readers are never far from my thoughts when I’m writing. I want them to get drawn into the worlds I create with words, and I work hard to make those worlds three-dimensional and filled with people who readers will want to get to know better. Better yet, I want them to think about those characters long after they’ve finished the book.”

Alexis said she was influenced by a book Barbara Hambly wrote called Those Who Hunt The Night. “One of the characters was a vampire named Don Simon Ysidro. Over the course of the story, I watched as Don Ysidro slowly reconnected with the honorable man he’d been as a human. When I finished the book, I wondered (and worried) about what happened to him after the story ended. Ms. Hambly had succeeded in making him that ‘real’ to me. It was several years before the next book in the series came out, but I never forgot him and was thrilled to spend more time in the world she had created. That’s how I would love readers to feel about the characters in my stories.”

Snowberry Creek is a fictional location for Death by Committee. The town reflects the flavor of the Pacific Northwest, which means coffee plays an important role in the town’s culture. “Seriously,” Alexis said, “there are at least seven coffee shops and/or drive-up places within two miles of my own house. With that idea in mind, I decided to include some rent-a-goats in the story. I’m not sure that’s a thing in other parts of the country, but it is here. It wasn’t that long ago that I drove by an empty lot in my own neighborhood where they’d put up temporary fencing and turned a flock of goats loose inside. There were about a dozen of them hard at work chowing down on the wild blackberry brambles that had grown out of control. That’s not something you see every day, so I pulled over and stopped to watch them for a while.”

She added that when she needed to come up with a way to discover a dead body, the goats were the first idea to pop into her head. “Those goats still make me smile,” Alexis said. 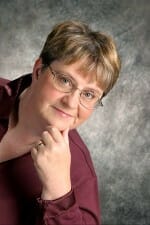 “My paranormal romance series, The Paladins, is centered around a barrier that separates our world from another. When there is an earthquake or volcanic eruption, that barrier fails and the crazies from the other world come pouring across. When I first started working on the series, my friend and I decided to take a day trip down to the visitor center at Mount St. Helens. Even though it had been years since the last major eruption, the land around the volcano had yet to make much of a recovery. Everywhere we looked we saw stark reminders of the damage the mountain could do. We drove up a twisting and turning road to the center.

“Once inside, one of the first things we saw was the seismograph that records the daily seismic activity. From the jagged lines on the graph, it was clear that there’d been some pretty serious rumbling going on that morning. I’d be lying if I didn’t admit that gave me pause for thought. After walking through the exhibits, we filed into the theater to watch the movie about the 1980 eruption, which was frightening in its intensity. After the movie ended, the screen rolled back up into the ceiling and the drapes parted to reveal the volcano in all of its terrible glory. Steam rose up out of vents on its surface, another clear reminder that the mountain was still active. All I can remember thinking at the time that the glass in the windows wouldn’t afford much protection if something happened. We left shortly after that, driving a little faster leaving than we had on the way there.”