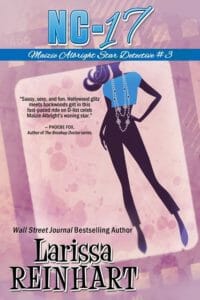 Maizie of the Maizie Albright Star Detective series has returned to her father’s home in Black Pine, Georgia, after twenty-three years of living in Hollywood with her stage-monster/manager mother. After starring in a hit teen detective show — Julia Pinkerton, Teen Detective — Maizie has (somewhat forcibly) chosen to pursue a new career in private investigations in the small lake resort town in the North Georgia Mountains.

Black Pine is fictional, but the North Georgia Mountains are one of my favorite places in the world. I live south of Atlanta — a two-hour drive to the mountains — and my family goes up there whenever we can. Last Mother’s Day, when I was planning NC-17, we headed to the area around Blue Ridge, Georgia. It’s a great area for apples. But this time we were headed to a museum I’d found. A museum that had caught my eye the previous fall.

Why Bigfoot? I already knew because of the title I’d chosen before writing NC-17 —NC-17 stands for the Motion Picture Association’s rating for no children under 17 admitted — I was going to have teenagers in the story. I love having children in my books, probably because I’m a mother and former high school teacher. I think they add an interesting perspective to the adult view of the mystery.

I had imagined these teenagers living in the mountains. I had to have them involved in the entertainment industry since that’s the focus of my ex-celebrity-turned-detective books. There were a lot of options, but I hit on YouTube since my teenage daughters seem to watch YouTube more than anything else. 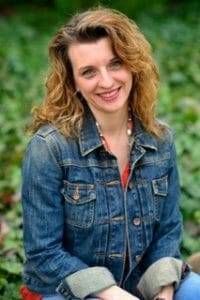 If my teenagers were YouTube stars living on a mountain, the idea of teenagers having a Bigfoot tracking show made total sense (to me). Thus the hit YouTube channel, Bigfoot Trackers, was born. And because of the popularity of this channel (in NC-17), these teens were big stars, including their twenty-something leader. He taught them the ins and outs of living off the grid while using the grid via the internet to become famous trekkers. (And they have parents pushing them into the big money world of endorsements — from outfitter equipment to power bars to cameras — but that’s another part of the story).

The mystery surrounding NC-17 is the disappearance of their leader, not Bigfoot. However, I have Bigfoot quietly (or sometimes loudly) lurking in the background. But when I mentioned my research on Facebook, I got a great response from many people who believe in Bigfoot and have seen him. Or know someone who’s seen him.

In NC-17, I don’t make claims either way. I do poke a little fun at Bigfoot, but I don’t discredit the believers. If you’re a believer or on the fence, check out the EXPEDITION: BIGFOOT!. It has a research library, an incredible museum with many pieces of evidence, including casts and recordings. If you ask the owners for their personal stories, take the time to listen. They’re amazing!

Do you believe in Bigfoot? Do you know Bigfoot stories?