You are here: Home / Author Interviews / Behind the story of Love on the Rocks
Spread the love 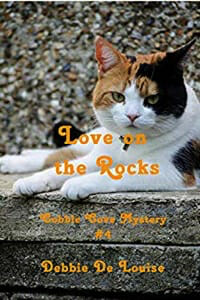 Debbie De Louise is an award-winning author and a reference librarian at a public library on Long Island. Love on the Rocks is her fourth Cobble Cove mystery.

“Throughout my Cobble Cove mystery series, I feature the theme of ‘things happen for a reason.’ In each book, the bad things that happen lead to better consequences. In my own life, I’ve seen this numerous times. Recently, I adopted two kittens. It was nearly a year since we lost one of our cats who we’d taken in as a senior, and my daughter wanted to adopt a younger cat. We visited a cat café that opened in our area, and she fell in love with a kitten. Unfortunately, the cat had already been claimed by another visitor. My daughter was heartbroken, but I promised we would go again when they had more cats available for adoption. When we visited a few days before her 14th birthday, she saw a black male kitten that interested her. Even though this one was available, it couldn’t’ be separated from its sister. After considering the pros and cons of adopting two cats, I decided to go ahead with it because the pair would be playmates. Ironically, the sister was a calico and though I’d had cats all my life, I’d never had a calico and always wanted one. Likewise, my daughter had always wanted a black cat. Although the first cat she wanted was taken, she ended up with two kittens. It was meant to be.”

Reaching out to readers

Debbie loves animals and always features cats and other pets in her books and stories. “I prefer writing mysteries but also write stories and books in other genres. I’d asked the members of my Facebook chat group to choose a scenario they would like to see in the next mystery. The choice with the most votes was a threat on Sheila, the library director’s life. I also wanted to feature a new cat in town and held a contest in my newsletter for a name for the new kitten. People submitted photos and names of their cats. The winner was a woman in Montana with a calico cat named KittyKai. After I had those two components in mind, I fashioned a flexible plot. As a pantster, someone who doesn’t outline too much, I develop my story as I write.”

Debbie said she doesn’t usually let her family read her manuscripts, but she does read them aloud while editing. While working on Love on the Rocks her daughter and a friend were home and overheard her edits. “I expected criticism because, as a 14-year old, she’s pretty adept at giving it. However, she and her friend said they really enjoyed the book. I think part of the reason was that I featured a teenager in this one. In the previous books of the series, there were only seniors, middle aged adults, and children.”

“As a librarian, I enjoy research, but I usually use traditional methods—books, the Internet, interviews, etc. My short story, ‘The Missing Mistletoe’ involved time travel back to the San Francisco earthquake. While researching the time period and the event, I learned a lot about what happened that I didn’t know and even came across the newspaper story that was printed following the earthquake. I thought that was rather cool and included it in the story.”