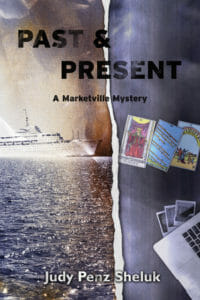 Hi there. My name is Misty Rivers and I’m here because Calamity Barnstable has a new book out called Past & Present and she’s asked me to fill in for her. It seems Callie (that’s what she likes to be called, and don’t you try calling her Calamity) is already busy working on her next investigation and she’s just swamped. I say it’s a good problem to have.

To be honest, I’m flattered at the invitation, especially since when I first met Callie in Skeletons in the Attic, she was very suspicious of my psychic abilities. Just take a look at the back cover of that one and you’ll see what I mean:

What goes on behind closed doors doesn’t always stay there…

Calamity (Callie) Barnstable isn’t surprised to learn she’s the sole beneficiary of her late father’s estate, though she is shocked to discover she has inherited a house in the town of Marketville—a house she didn’t know existed. However, there are conditions attached to Callie’s inheritance: she must move to Marketville, live in the house, and solve her mother’s murder.

Callie’s not keen on dredging up a thirty-year-old mystery, but if she doesn’t do it, there’s a scheming psychic named Misty Rivers who is more than happy to expose the Barnstable family secrets. Determined to thwart Misty and fulfill her father’s wishes, Callie accepts the challenge. But is she ready to face the skeletons hidden in the attic?

Seriously, scheming psychic? I found that a bit harsh. Anyway, I’ve won her over, bit by bit (though she’s still a terrible skeptic) and now that she’s started Past & Present Investigations with her best friend and business partner, Chantelle Marchand, I’m part of the P&P team. My job is to maintain the tarot section of the website, and post a Misty’s Message which, I am proud to say, has not only helped in her most recent investigation, my first message actually convinced a client to hire the firm. Here it is: 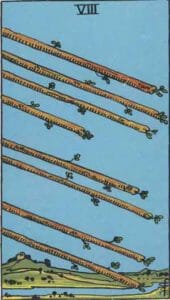 The Eight of Wands (Element: Fire)

This is the only card in the minor arcana that does not include people, animals, or mythological creatures. Notice how the eight wands work in tandem, each pointing in the same downward direction, as if in harmony with each other, the leaves and the earth. The overall impression of the card is one of peacefulness, movement, teamwork, and determination.

Misty’s Message: This is the perfect time to take action. Working with a team will help you to produce the results you desire.

Now, it would be wrong of me to make you think that I’m the only one on the P&P team doing anything to solve cases. There’s Chantelle, mentioned earlier, who is a specialist in genealogy and a great puzzle solver, Shirley Harrington, a retired research librarian who loves to go through old newspaper archives searching for clues, and Arabella Carpenter, the owner of the Glass Dolphin antiques shop, who referred our latest client to us, and is an expert on all kinds of old stuff. Of course, without Callie, there would be no Past & Present…and no Misty’s Message. Gosh, I don’t even like to think about that.

Anyway, I thought I’d share a bit about Past & Present with you here, in the hopes you’ll want to read it. After all, Callie’s counting on me to promote it, and I don’t want to let her down. It’s the sequel to Skeletons in the Attic, but here’s what Midwest Book Reviews had to say about that: “A tense, emotionally gripping, multifaceted mystery that serves both as a perfect continuation of Callie’s life story and as a fine stand-alone read for newcomers. Filled with surprises and revelations, Past & Present is a gem in the mystery genre that should not remain hidden, but shines above and beyond the typical genre read with a spark of originality and compelling scenes that will keep readers engaged, educated, and looking for future cold cases for Callie to heat up with an investigation.” 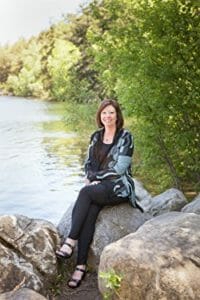 Pretty amazing, don’t you think? And now, without further ado, here’s more about Past & Present:

Sometimes the past reaches out to the present…

It’s been thirteen months since Calamity (Callie) Barnstable inherited a house in Marketville under the condition that she search for the person who murdered her mother thirty years earlier. She solves the mystery, but what next? Unemployment? Another nine-to-five job in Toronto?

Callie decides to set down roots in Marketville, take the skills and knowledge she acquired over the past year, and start her own business: Past & Present Investigations.

It’s not long before Callie and her new business partner, best friend Chantelle Marchand, get their first client: a woman who wants to find out everything she can about her grandmother, Anneliese Prei, and how she came to a “bad end” in 1956. It sounds like a perfect first assignment. Except for one thing: Anneliese’s past winds its way into Callie’s present, and not in a manner anyone—least of all Callie—could have predicted.