You are here: Home / Author Interviews / Behind the story of Murder She Reported
Spread the love 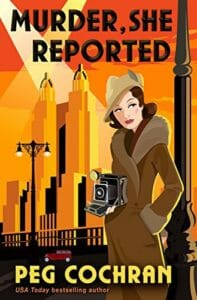 Peg Cochran is an avid reader. So avid, in fact, that she’s been known to “read” the dictionary. At age seven, she wrote plays and forced her cousins to perform them at Christmas dinner. She claims she switched to mysteries when she discovered the perfect hiding place for a body down the street from her house. The body has not yet been discovered, but her books have. Her latest cozy is Murder, She Reported, which is set in 1938 New York.

Women’s rights and the changing role of women in society play prominently in Murder, She Reported.  “My protagonist was born into a wealthy family in NYC and she shakes everything up by taking a job after college when the expectation was that she would spend her time taking up the social whirl of her peers.  It’s especially shocking because she becomes a photographer for a newspaper and a crime photographer at that. She’s definitely upsetting the apple cart by venturing into what was still predominantly a man’s world.”

Peg said she also touched on the chasm between the “haves” and the “have nots” and the economic inequality that existed between the social classes.  “Elizabeth’s friend Irene, who she met when they were both hospitalized with polio, is a single woman alone in the world with few skills.  She has to resort to desperate measures to keep from literally starving.”

While Peg doesn’t remember exactly when the idea for the book came to her, she said the first kernel of the idea was that there was a girl who was a reluctant debutante and decides to go against societal norms. “I thought it would make for interesting conflicts.  It mushroomed from there as books tend to do.” 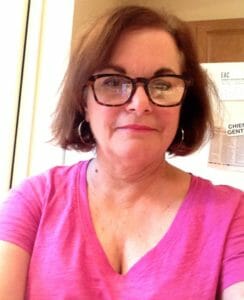 “The hardest, but also the most interesting part of writing this book was doing the research,” Peg said. “And research is so much easier now that we have the Internet—otherwise I would have had to move into the library!  Every time I sit down to write I end up doing some sort of research whether it’s finding out how much a loaf of bread cost in 1938 or whether traffic on 64th Street runs east or west—I lived in NYC for 10 years and worked there for another 20 but that’s just the sort of thing I’ve now forgotten.”

Peg also researched the speech patterns from that era. “I have to be sure that any expressions I use or my characters use were actually in use in 1938 or earlier. And what expressions were unique to that time period.  What was the slang? It’s been great fun, I have to say. I’m sure that despite all my research some anachronisms may have crept into the book, but I did my best to make it as accurate a depiction of the times as possible.”

While the research for Murder, She Reported was straightforward, it wasn’t that way for her Cranberry Cove series. “I visited an actual cranberry farm and watched the harvest. The owner was very kind and answered all my questions except one. He had no idea what to say when I asked him what they’d do with the berries if a dead body suddenly rose up in the bog!”