You are here: Home / Author Interviews / Behind the story of To Bead or Not To Bead by Janice Peacock
Spread the love 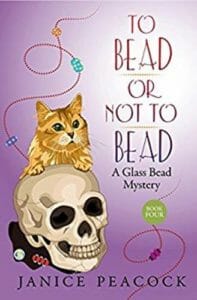 Janice Peacock decided to write her first mystery novel after working in a glass studio full of colorful artists who didn’t always get along. An award-winning artist, her work has been exhibited internationally and is in the permanent collections of several museums. To Bead or Not To Bead is the fourth cozy mystery in the Glass Bead Mystery series.

The world of beads

“I think one of the most important things to know about me is that I am a glass beadmaker and have been for over 26 years. In fact, I was one of the first beadmakers in California. Since I know a great deal about glass and glass beadmaking, the books in the Glass Bead Mystery series are infused with my knowledge. So, when someone reads about these topics in my novels, they can be assured that the information is accurate. That’s one thing I like about cozy mysteries—reading one is an opportunity to learn new things about crafts, hobbies, and culinary topics.”

Like many cozy mysteries, the books in the Glass Bead Mystery series deal with the serious subject of murder while giving readers a humorous escape from the stress of their own day. Janice said the books in the Glass Bead Mystery Series address the challenges artists experience when they make a living from their creativity. “An artist’s job is a difficult one—it’s not all “Let’s see what pretty things I can make today.” The main character in the series is an artist who works with glass to create beads and jewelry. Each book in the series addresses challenges of living the life of an artist—dealing with envy, artists who steal ideas, and the difficulty of making ends meet as an artist. One theme that runs through these novels is that of women’s friendship and how friends support each other during stressful times, such as when they are trying to find a murderer before he kills again. That’s stressful, to say the least.” 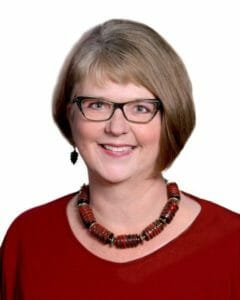 The role of glass

“I’m a glass artist. The idea for the series came to me while I was working in a glass blowing studio in Corning, New York. Corning is well-known for their Pyrex measuring cups and baking dishes, but they also have an art studio there where people can take classes. I was taking a class with a famous glass artist who creates small sculptures out of glass using a torch, while in another studio nearby some students were blowing glass. I saw so many quirky characters, secret agendas, jealousies, and even a hook-up between two people who were clearly married to other people. I thought this place and these characters would make a great murder mystery, but when I thought of the perfect murder weapon, I knew I had to write it down. A few years later I did, though I wrote a couple of other books in the series before I wrote Off the Beadin’ Path, which was inspired by my time at the Corning Studio.”

Janice’s books are set in Seattle because it is a glass-oriented city. “It is home of world-renowned glass artist Dale Chihuly, home to the Pilchuck Glass School, and chock full of glass studios. Since I was writing a book about a glass artist, I decided that Seattle would be a great setting for my novels. One little known fact about Seattle is that it has a series of underground tunnels—more like streets—beneath its streets and buildings.”

After a fire in the late 1800s that decimated Seattle, merchants started rebuilding immediately. Meanwhile, the leaders of the city decided to re-grade the city because the downtown—where the merchants were busily rebuilding—was too close to sea level. The city was eventually re-graded, which left the merchants’ businesses several feet below ground. Once the re-grading was complete, the merchants closed their lower level businesses and opened their doors at the new level. The old city beneath the city remains, complete with sidewalks and old rooms from businesses, and even the occasional artifact. The underground area in Seattle is known as the Seattle Underground. “Of course, the Underground is a perfectly spooky setting for a murder mystery, so I made the theater where much of To Bead or Not to Bead takes place directly above some of the underground passageways,” Janice said.

“I knew, for the sake of research, and admittedly for the fun of it, I needed to visit the Underground. That wasn’t too hard to do because there are a couple of tour companies that provide tours. Last fall while I was in Seattle I took two of my friends on the tour. The tour started in Seattle’s Museum of Death, which was far creepier than anything I saw in the Underground. The Underground tour was fun and fascinating. It would be terrifying to be down there in the dark without a tour guide. It was the perfect setting for a murder mystery!”