You are here: Home / Author Interviews / Behind the story of Shelved Under Murder by Victoria Gilbert
Spread the love 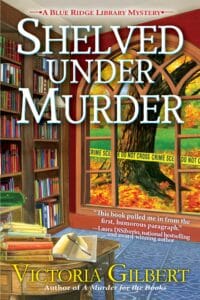 Victoria Gilbert was raised in the shadow of the Blue Ridge Mountains and turned her early obsession with reading into a dual career as an author and librarian. Victoria says that when she’s not writing or reading she likes to spend her time watching films, gardening, or traveling. Shelved Under Murder is her second book in the Blue Ridge Library Mystery series.

The beginnings of Shelved Under Murder

“The initial inspiration for the first book in the series, A Murder For The Books, came from a real-life event—something that happened many years before I ever wrote a word of the book. When I met my husband, he told me a story about something that had recently happened to him. It was a rather unique medical occurrence that made me consider what the outcome would have been if the same thing had happened to someone in the past. I was not writing professionally at the time, so after puzzling over this for a bit, I just shelved my “what ifs” in the back of my mind. But the concept stayed with me and when I decided to write my first murder mystery I used this situation as the basis for the historical mystery in the book.”

Shelved Under Murder is book two in the series, so in part it arose out of the characters, events, and plot points Victoria included in the first book. Victoria said, “In A Murder For The Books I created an artist character who was the late husband of the protagonist’s beloved aunt. This character still wields influence over the aunt and a few other characters, despite having died years before, so I knew I wanted to expand his story in book two. Throughout the Blue Ridge Library Mystery series, I ‘m deliberately weaving together historical events and modern mysteries, so the artist’s story became an essential thread in the fabric of the second book.”

Victoria added that because she minored in Art History in college, incorporating elements of artists’ lives and the art world was a natural choice for her. “I’ve always loved art of all kinds. Because I lived about an hour outside of Washington when I was young, my family was able to take advantage of the museums in D.C. When they took my older brother and I to the National Gallery of Art and other art museums, older patrons used to remark how well behaved we were. That wasn’t because we were such perfect children – far from it – but because we both loved art and were deeply interested in all the paintings, sculptures, and other artworks.”

Victoria said she includes references to issues that are important to her, including the importance of looking beyond outward appearances – whether that be in dealing with people, social expectations, gender roles, or the arts. “My protagonist, who struggles with her body image, reflects my attempt to discuss how physical appearance affects self-esteem, especially for women. For a cozy mystery, I also have an unusual main male character – he’s a dancer and choreographer instead of a detective, P.I., or policeman. Through his character I try to address the assumptions people often make about men in the arts, particularly in the dance world – not just assumptions about sexuality, but also stereotyped opinions about personality traits.

“In this book I also use forgery to examine the issue of authenticity in the arts. I hope the topic makes readers think about how and why we value artistic creations – and their creators. So many factors go into an artist becoming “famous,” and often those factors have less to do with their talent or the quality of their work and more to do with trends, the opinions of tastemakers, and sheer luck. Honestly, I find it fascinating that several well-known works of art, including many in revered museums, have recently been proven to be fakes. Since these may be works that I’ve personally seen and admired, I have to consider what that means about the way I view art. Does the painting I felt was magnificent one day become simply trash the next, when it’s revealed that it’s actually a forgery? I still haven’t formulated my answer to that, but I think it’s important to ponder and discuss these topics, especially when trying to formulate our own conceptions of what we consider ‘art.'”

Victoria said she is far more interested in people reading her books than in reading about her. “Honestly, my life is not that exciting, and while I like to think I am a good conversationalist I would much rather discuss my books than myself.

“I want to tell stories I feel passionate about and understand that my personal passions and my writing style are not everyone’s cup of tea. I know that I can’t please everyone – nor should I try. I would rather be honest in my writing than create books that appeal to almost everyone yet offer no unique viewpoint or distinctive style.

“While I think that hitting bestseller lists would be wonderful, it is not my main goal. What I really want to do is to keep writing, and having my books published, for as long as I live.  Which means that I DO need to sell enough books to allow publishers to continue to take a chance on me, but I’m not obsessed with achieving certain sales goals.

She also said she believes in constantly working to enhance one’s craft, whatever that might be. And last, she said, “I’m convinced that my best book is…my next one.”

Sometimes, you just have to read about it…

“As a former librarian I have a lot of hilarious stories about research. One particular incident occurred when I was working at the Museum of TV and Radio (now the Paley Center for Media) in NYC. As head of research part of my job involved answering phone inquiries about historical aspects of the radio and film industries. Because the museum held actual radio broadcasts and TV footage, I often fielded calls asking about items in our collection. Some of the queries referred to very obscure things, but none as obscure as the one requested by a young lady who wanted to know if we had footage of a certain ancient war.”

Caller: “Do you have any shows covering the Peloponnesian Wars?”

Me: “You mean reenactments, of course. Wait a minute, let me check.”

Caller: “No, I want actual footage. You know, the real thing.”

<Long pause while I consider this>

Me: “Uhm, no, we wouldn’t have anything like that. Television didn’t really start covering events until the 1940s, you know.”

Caller: “Look, my teacher said I had to read this thing by some guy named Thucydides about some war and I don’t have time for that. So I thought I’d just watch old news reports about it or something.”

Me: “Okay, but…” <another pause as I consider how to reply diplomatically> “You do realize that Thucydides was writing about events which took place in the 5th century B.C., right?”

Me: “There wasn’t any TV, or even radio or film back then. So there can’t possibly be actual footage…”

Caller (irritated): “So you can’t help me?” <grumbling> “This is such a stupid assignment. What kind of war was it if it wasn’t even covered on the radio?”

Me (trying desperately trying NOT to laugh): “I’m afraid you’ll just have to read about it.”

Caller: “Not happening. I think maybe I’ll just try to find something somewhere else. You don’t have newsreels, do you?”

Caller: “Okay then. Thanks for your time.” <hangs up phone muttering something about how useless I am>

I have to agree with Victoria. That could be my favorite research story of all time.