You are here: Home / Author Interviews / Behind the story of Picked Off by Linda Lovely
Spread the love 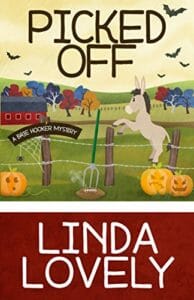 According to Linda Lovely’s bio, she finds writing pure fiction not much of a stretch after spending years writing PR and ad copy. Using a blend of mystery and humor, she enjoys making the types of characters who most annoy her disappear. Linda’s latest mystery is Picked Off, and here are the three themes running through the story.

“The characters in Picked Off face a variety of real-life issues. Every day we see the potential of greed to corrupt people and tempt them to make unethical and/or illegal choices. That’s one reason greed is a common thread in many of my books even when it’s not central to the plot. In Picked Off, greed provides the impetus for several crimes.”

Linda also said the book touches on how the disappearance of competitive traditional news media in smaller markets, coupled with the rise of online “news” sources. increases the potential for reporting bias and abuse. “I was a journalism major and believe strongly in a free press, but, with today’s media so fractured, it’s becoming all too easy for people to only read/tune into news sources that reflect their ideology and opinions and never hear counter arguments or facts.”

The third theme involves the need to keep urban sprawl and unplanned development from erasing an area’s greenspace, agricultural heritage and natural beauty.

Goats and other funny characters

Picked Off is the second book in the Brie Hooker Mystery series, which is set on a goat dairy in Upstate South Carolina. Linda said, “I got the idea for the series after I visited Split Creek Farm and was charmed by its goats and the other members of its animal cast—free range poultry, pot-bellied pigs, guardian dogs, etc. At our vegan doctor’s urging, my husband and I had recently attempted a vegan diet and received a lot of guff from our cheese-addicted kin. I thought having a vegan live with a cantankerous carnivore relative at a goat dairy offered lots of potential for humor.”

Linda said that she loves to read almost all mysteries, thrillers and suspense novels. “My favorite books dish up a little humor as relief and feature imperfect but likeable main characters I can root for. I’m not a fan of excess violence and gore. So I try to write what I like to read. Light but believable. Laughs but no shortage of nail-biting, danger-packed scenes to challenge my heroines. Along these lines Susan Isaacs is one of my favorite authors.” 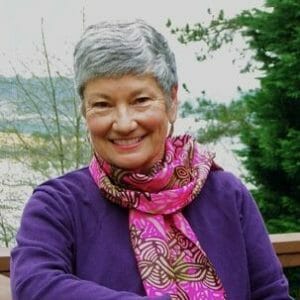 “I love to do hands-on research,” Linda said. “Recently that meant joining goat yoga sessions at Split Creek Farm. What a hoot! More laughs than yoga. The baby goats—kids—are so full of life and curious.”

While the goat yoga classes were fun, Linda’s favorite research can get down to the nitty gritty. “I love attending the annual Writers’ Police Academy, which takes place at a real police academy with the same instructors who train police, firefighters, EMS, and other law enforcement officers from around the world. This August I’ll be attending my sixth WPA.    At the WPA. I’ve joined a SWAT team on a mock building raid. Looked for clues in a burned-out building with an arson investigator. Practiced martial arts self-defense measures. Shot Glocks and AR-15s at a live-fire range. Discovered the pressure of split-second shoot-don’t shoot decisions in simulations that mimic real world situations faced by police. It’s like Disney Land for adults where I learned so much about the techniques and pressures of fighting the bad guys.”