You are here: Home / Author Interviews / Behind the story of Fatality by Firelight with Lynn Cahoon
Spread the love 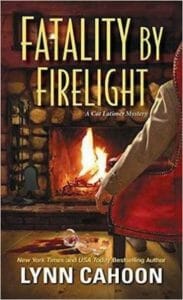 New York Times bestselling author Lynn Cahoon’s latest Cat Latimer Mystery has just been released. For this interview, Cahoon talked about Fatality by Firelight—how it developed and the story behind the story. She also revealed one of the craziest stories about a writer’s research I’ve come across.

“In Fatality by Firelight, the characters deal with the idea that some girls just attract crazy,” Cahoon said. “And maybe it’s the naïve me that I’m writing about when I have the romance novelist who wants to think the whirlwind romance is love at first sight, even though there are warning signs. I went through my share of the crazy when I was first dating after my divorce. What makes women lose their reason when they are in that kind of relationship?

“In high school, my best friend had a boyfriend who was the classic stalker. He had to know where she was at all times. And he hated it when she hung around with anyone but him. But he also made her a beautiful glass castle. I always felt like he would have liked to teleport her into that castle for safe keeping. Maybe it is an issue book–when does romance turn into obsession?”

Fatality by Firelight is the second book in the Cat Latimer series and when Cahoon began writing the story, she wanted to explore her fictional setting a bit more.  “Aspen Hills a small mountain town south of Denver, Colorado. The major business and employer is Covington College. And there’s a ski hill right outside of town. Kind of like the ski hill outside Boise where I used to cross country ski. I’m always taking places I’ve visited and mixing them with other spots to develop the perfect setting. Like Aspen Hills.

“There’s an antique store off the highway between Chicago and St. Louis. During prohibition and the height of the mob families, the building was a brothel, bar (speakeasy) and gambling hall. I’ve done a lot of reading on the area and kept coming back to this story. And I started to wonder where else the mob families had moved to be out of the Chicago limelight. So when I started digging into the college and the town where Cat grew up, I realized my fictional town had a secret. A really big secret everyone knew—except for my heroine.”

Cahoon said she believes everyone has secrets. “Real life or fiction, if a person tells you their life is an open book, they’re probably keeping secrets from themselves.” 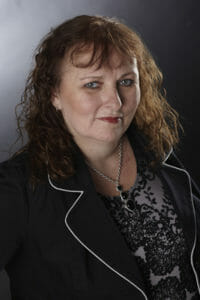 It’s the Libra in her

“I’m an Idaho native,” Cahoon said. “I’m sarcastic in my  humor, love my husband and son obsessively, and I want to know the rest of the story. Maybe that’s my Libra tendencies or my writer imagination, but a brief description is only going to wet my curiosity. Unless it’s about something I don’t want to know about. Like finding underground utilities. My husband and his friends can talk for hours about the tracer lines and gas mains and drops… UGH, now I’m doing it. Let’s go back to literature.

“And I’m fun. Or at least I am if I’m not on deadline, deep into a book, or watching my Amazon numbers on release day. Okay, maybe I’m not fun.”

How the series began

The characters and plots in the Cat Latimer series were conceived while Cahoon and her husband drove to Boise from Illinois. Faced with a twenty-four-hour road trip, what else would a mystery writer do than brainstorm a new book?

“I threw out ideas, and he made suggestions, but all of a sudden, I had a set up. Writer’s retreat in the home Cat got from her ex-husband when he died. And I knew I wanted two mysteries in the original three books. One, the current whodunnit, that Cat and the gang work on solving. The other would be an overarching mystery with gothic tones on what happened to the ex-Mr. Latimer. I scribbled notes and put it away, letting my subconscious work on the idea for several months, finally writing three chapters and a brief synopsis in January of the next year.”

Put down the gun, lady

Cahoon hung out at a particular bar after her first marriage ended. She stopped in after leaving her creative writing class. One night, she was talking to two good old boys about guns and shooting. They offered to take her out shooting the following day. And that’s where “normal” ends.

“I met them at their apartment complex the next day. We had to wait a few minutes before we could leave because the cops were at the complex handling a domestic disturbance, and the guys didn’t really want to carry out two duffle bags filled with guns in plain sight of the police. Did this set off a warning sign to me? No. Does it now? Heck yes.

“Anyway, we got out to the desert and we start shooting all kinds of guns.  I was writing a scene where the guy shoves a gun in someone’s side, so after making sure the pistol was unloaded, I shoved it in my side to feel the experience. They freaked, and I got a lesson in never, ever pointing a gun at myself or anyone else even if I thought it was unloaded.

“Four hours later, I was back at my house, writing the scene with my new found gun knowledge. Now I realize they call characters in stories who act like I did—too stupid to live. But it was a great scene.”