You are here: Home / Author Interviews / Matthew FitzSimmons and the story behind Poisonfeather
Spread the love 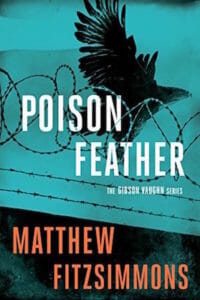 Matthew FitzSimmons began his writing career in the eighth grade. He wrote the story, a fantasy called “A Mage in Spirit” about a boy elf and a Pegasus, for English class. He received a good grade, but suffered a great deal of boyhood angst over the experience. FitzSimmons is writing professionally these days and his latest thriller is called “Poisonfeather.” Here’s the story behind “Poisonfeather,” and why that first effort has stuck with FitzSimmons to this day.

“The assignment was to write five pages; I wrote thirty. I wrote two drafts, which is only impressive because I wrote the entire story by hand. The night before it was due, I borrowed stencils from my mother to make a fancy title page. I spent hours making certain every letter was perfectly straight. When I turned it in to Mr. Anderson I was certain I wanted to be a writer until he asked me, ‘What does, ‘A Mage in Spirt’ mean?'”

It turned out FitzSimmons had left out the second “I” in the word spirit. He said, “Mr. Anderson gave me an A, but all I cared about was messing up that title page. It bothered me for years, and I didn’t write again until my twenties. Moral of the story: there’s no I in team, but there are two in spirit. Also, quitting is a hard habit to break.”

The idea for “Poisonfeather” came from discussions FitzSimmons had with friends. In those discussions, he posed a hypothetical question—what profession would make the best villain?

“Post-2008,” FitzSimmons said, “the overwhelming response seems to be ‘stockbroker.’ There is such residual frustration that no one has been held accountable for the damage done by the Great Recession. I thought it would be interesting to pit my protagonist against such a character. Then I remembered reading an article in the Atlantic by James Silver called, ‘Is Wall Street Full of Psychopaths?’ That sparked a flurry of research out of which grew Charles Merrick.”

There’s also an underlying theme in “Poisonfeather” about the issue of accountability. FitzSimmons said, “Arrogance bordering on hubris haunts all the characters of ‘Poisonfeather.’ As a reader, I tend to detach from stories when the protagonist is never in any real danger. I don’t mean that danger isn’t swirling around impressively, only that no one, the hero included, takes the danger all that seriously. The hero of this type of thriller repeatedly chooses a course of action so reckless that it should lead to death or disaster ninety-nine times out of one hundred, yet somehow always works out.

“I’d argue that the main difference between action and horror as genres is that in the former, the hero survives regardless of the odds, while in the latter, all bets are off. Horror has consequences while action is largely consequence free. This is why a series like ‘Game of Thrones’ has been so successful—it married action beats to the consequences of horror. I’m a fan of consequence and in ‘Poisonfeather’ there are consequences. Consequences that have pursued Gibson Vaughn from the first book and consequences that will follow him into the third.”

FitzSimmons also said the writing process for “Poisonfeather” was more difficult because he only had seven months to finish the book. “I wrote ‘The Short Drop’ in my own time. I wrote in the evenings and on the weekends. On vacation. It was done when I said it was done. How different to write to a publisher’s deadline. To wake up in the morning and commute eighty feet to my desk. I’ve discovered that writer’s block takes on a whole new dimension when the clock is ticking.”

At one point in his career, FitzSimmons became an actor. He soon discovered one big problem he couldn’t overcome, his height. FitzSimmons is 6’6″ tall and said his chances of being cast as Romeo were slim, at best.

“I learned my lesson early and set my sights on directing. In retrospect, it was wonderful training for an author. I try to write each character as if they are the lead in their own story and not merely appendages to the protagonist’s journey. It’s the only way I know to create three-dimensional characters, and I learned it directing actors—in the conversations I had with each cast member, looking at a scene from multiple characters’ perspectives, and not playing favorites.”