You are here: Home / One Step Ahead - Featured / The Starbucks email scam — phishing or for real?
Spread the love 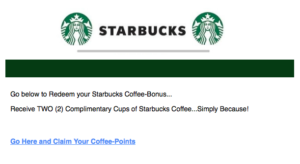 I’ve been a Starbucks fan for several years now. At least, until they changed their rewards program. The program is now based on how much you spend and, quite frankly, it amounts to about a 5% reward for frequent customers. Five percent isn’t much of a savings, but it does bring me to the Starbucks email scam tip.

Maybe they’ve been around for a long time, but I don’t recall seeing one Starbucks email scam until this past week. The email didn’t promise riches galore, but something simple—a couple of free coffees. Oh man, with the changes in the rewards program, I really wanted this one to be for real.

The email used the Starbucks logo, the usual green color, and there was even an opt-out link at the bottom. The tricky part about this email was this looked like any legitimate coupon provider who’d gotten my mailing information and had added me to their mailing list. Now, don’t even get me started on the hows-and-whys of adding me to a marketing list without my consent, but let’s just assume that’s what happened. Nevertheless, if even if this were from a legitimate company, I’d call this “strike one!”

I also became extremely curious about a little detail most wouldn’t think twice about—the address. It’s easy enough to find out if an address exists, just use the zip code locator on USPS.com. So, I went after the “contact address” in the email. It was 1748 W. Olympic Blvd., Westwood, CA. Sadly, the post office claimed the address didn’t exist. Maybe they were wrong. To be really sure, I checked Google Maps. Sadly, Google Maps couldn’t find the address either. Apparently, the USPS got this one right…there is no such address, which is “strike two!”

With two strikes against the sender of my hoped for Starbucks coupons, I made one last ditch effort and checked the domain name for the email sender. If you guessed the result was “strike three!” you’re right on the money. The site was on at least one blacklist. Definitely, those Starbies email coupons were out of the game.

Avoiding the Starbucks email scam and others — the easy way

In reality, you don’t need to go to so much effort. Just remember three simple rules: