You are here: Home / Author Interviews / Behind the story of Extreme Prey with John Sandford
Spread the love 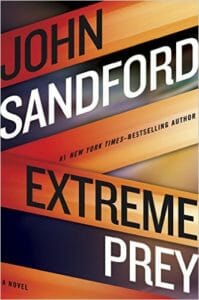 On April 26, Extreme Prey, the twenty-sixth Lucas Davenport novel from John Sandford, was released. For this book, the New York Times Bestselling author is tackling the subject of politics. Not just any politics, but the presidential election with all it’s rhetoric—the promises, the lies, and the potential for tremendous anger amongst voters. Here’s a look behind the story of Extreme Prey.

“Basically,” Sandford said, “I’m a former journalist and I kind of just look at politics as being something that goes on that I can observe and I don’t really have any strong ideological leanings. And so, what I see is there are a lot of very angry people out there and with some justification in many cases on both the left and the right.”

Sandford is an avid student of history and reads two newspapers a day. He said he’s observed a tremendous amount of anger, which sometimes boils over. “You have a lot of really angry people who are angry over a wide variety of things, but the salient aspect of that is the anger. The book is sort of a journalist’s look at a certain kind of politics and a certain kind of anger and what happens when you push the anger too far.”

I can’t do one crazy killer after another where the only aspect of it is the craziness.

While he’s dealing with a very contentious subject, Sandford is well aware of the limitations of a thriller and says he’s not trying to create a social commentary. “The problem with social commentary is you have to make some kind of cogent argument and the thing about a thriller is that a thriller lives on speed. It lives on velocity. It lives on being a page turner and entertaining people and making them feel the intensity of the violence.”

In comparison to some of the early “Prey” books, Extreme Prey feels less violent. Rather than there being less violence, however, Sandford says it’s simply different. “When I was starting out, there were some harsher characters. But, after you do about four really mad-science, serial killers who are cutting people’s eyeballs out or chopping them up with a machete, you really have to move on. I can’t do one crazy killer after another where the only aspect of it is the craziness.”

Reviewers consistently note the series, despite twenty-six installments, still feels fresh. Part of the freshness comes about because Sandford doesn’t want to repeat himself. “I think freshness in books becomes a problem when you work out of inspiration. I know I only have a limited number of inspirations. But, what you can do to keep it fresh is to approach it as an engineering problem. I’m a former journalist and I read a couple of newspapers a day and stuff pops up all the time.”

Taking the material he finds in his reading, Sandford analyzes it against what he and other writers have done. He then looks against the results and engineers a solution different from what he’s done with the same character before. “That goes a long ways toward keeping it fresh,” he said.

“I see my readers as intelligent people and I work really hard to keep their interest. I have a lot of background in the area that is important to thrillers, having been a newspaper reporter for twenty plus years, and I’ve seen a lot of violence and I’ve seen dead bodies and I worked in hospitals where you see gunshot victims and stabbing victims, so I know of what I speak.”

The stuff you see as a reporter, especially in crime, is usually so stupid it won’t support a thriller.

In all of the violence Sandford saw in his days as a reporter, he noted there was often a sense of randomness. He noted how fiction, especially a thriller, must maintain a sense of order. On the flip side, reality and non fiction may not have the same limitations.

“You can’t be random when you’re writing a novel,” said Sandford. “The stuff you see as a reporter, especially in crime, is usually so stupid it won’t support a thriller. There are enormous numbers of people out there doing really stupid stuff. I knew a case of a guy who got out of prison and they gave him a little bit of money and he went out and he got really drunk. He was out of money and drunk, so he got a big rock and tried to crack open a Coke machine to get the change out of it.

“He was so drunk he fell asleep with the rock in his hand next to the machine, so they just took him back to prison. He was out for, like, 24 hours. That’s not really good material for a novel. It’s kind of a passing incident you could have some guy talking about, but in the kind of novels I write, the villains have to have some level of basic intelligence just to provide a challenge for the cops. So, it’s not real, but that doesn’t mean it’s not interesting, too.”

Learn more about Extreme Prey and John Sandford at johnsandford.org.