You are here: Home / Uncategorized / Mystery of the Lei Palaoa — a look behind the story
Spread the love 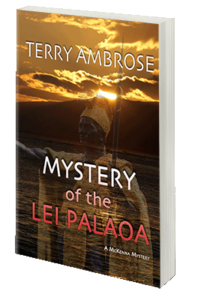 It was March 2015. A beautiful Tucson afternoon—warm temperature, gentle breeze, ample sunshine. The crowds were light at the Tucson Festival of Books and I was in the Mystery Writers of America booth. You could call what happened next a chance encounter. Better yet, serendipity. And the birth of Mystery of the Lei Palaoa.

Pamela Asbury-Smith was also in the booth. Our jobs were to hand out flyers and talk up MWA to those who stopped by. It turned out Pam had lived in Hawai’i. She has tremendous respect for the culture and traditions of the islands and we had all sorts of things to discuss. A man wearing a wide-brimmed hat, khaki shorts, and an Aloha shirt approached the booth. Around his neck, he wore a lei niho palaoa.

The lei niho palaoa is a necklace made of a whale’s tooth strung on human hair. It was worn by Hawaiian royalty—the Ali’i. Even today, it is considered highly disrespectful for someone not of the ruling class to wear a lei palaoa. I wondered if the man had Hawaiian blood? He assured us he did not. Perhaps the necklace was a replica? Again, a no. His lei palaoa was the real deal. At this point, Pam tried to educate the man about the significance of what he wore. He knew full well the history of the lei palaoa and was quite proud of the fact that he could afford one.

I have to admit, I knew little about the lei palaoa prior to their conversation. However, as the discussion continued, I saw the potential for conflict in a mystery—and the opportunity to delve into the world of privilege. In our society, privilege is not conveyed as it once was. No longer does it come from a social class or lineage. These days, privilege is most often enjoyed by those with money.

So, what would happen if our guy from Tucson came across someone with rabid ideals while in Honolulu? Oh my, that would be…tense. It could even promote—dare I say it? Killer tensions.

Mystery of the Lei Palaoa helps readers learn a bit about Hawaiian history, explore the two sides of privilege, all while seeing what McKenna will do to solve a case with no clues, no witnesses, and no evidence. Learn more about what was behind the story on my Pinterest board!

Whether you read on Kindle or Nook, Mystery of the Lei Palaoa is available for free. You can find it in Kindle format on Amazon and in Nook format on Barnes & Noble.